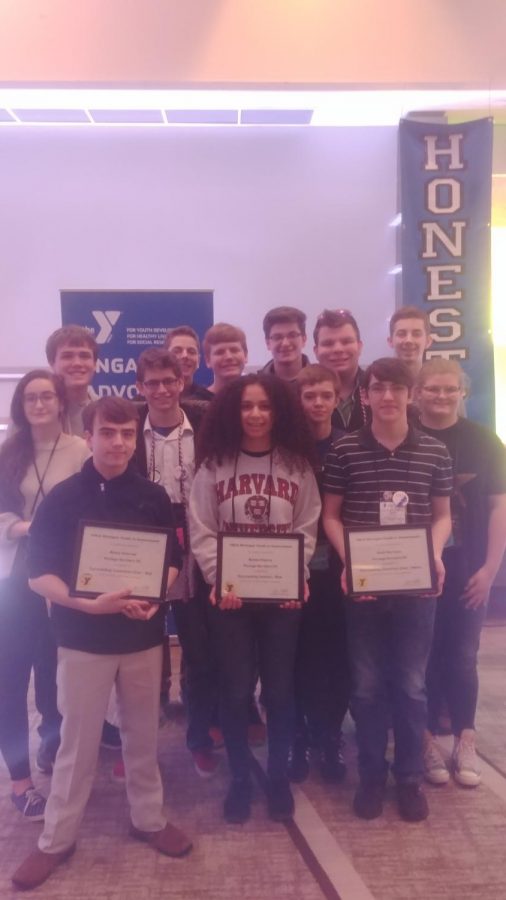 Michigan Youth In Government is a club here at PN that gives students the opportunity outside of their government classes to learn about U.S. government and what it means to be a part of a working democracy. Run by teacher Amber Dixon, students participate in monthly meetings and two conferences each year.

“Michigan Youth in Government is a tremendous experience for the students to learn about the legislative process. This is the only student group to be able to work on the House and Senate floor to fail and pass legislation. The legislation the students pass and the Youth Governor signs, goes on to the real Michigan legislature as issues important to teens today. The stand up driver’s license, for example, was a Youth in Government student idea. It’s a great experience any student is lucky to have,” said adviser and social studies teacher Amber Dixon. “Two of our students are even applying for the national summer program, CONA, the Conference on National Affairs. 10 days in Washington D.C. and in the Black Hills of North Carolina. Only 25 students from Michigan are chosen. As MYIG says, ‘Democracy must be learned by every generation.’  The best way to learn it, is to practice and be involved. So come and get involved!”

At each meeting, students have the opportunity to “debate bills and other current issues,” said sophomore Alex Thompson. While high school students are not old enough to participate in our democracy by voting, that doesn’t mean that their civic participation is limited. “It’s important for children to be involved in government because it’s important for children to understand the processes that directly affect their everyday lives,” said Thompson.

Youth in Government students have two opportunities to travel to East Lansing for the Fall and Spring Conferences, and PNHS MYIG spent last week in East Lansing for their annual Spring Conference. Portage Northern won the most awards of any school at the conference. Best Senator and Best Committee Chair Awards were given to Basma Hegazy, Noah Morrison and Reece Leversee, with Honorable Mention for Blue Senator going to Britton Gustafson. Additionally,  Noah Morrison, Alex Thompson, and Carter Wells had their bills signed by the Youth Governor.

“The committee reviews the bills in their initial stages and then works on them so that they can be the best they can and be debated, and the committee chair facilities that I [as the committee chair] sit in the front of the room and make sure we’re being productive,”  junior Noah Morrison said. “I was really happy and was honored to be rewarded for my efforts.”