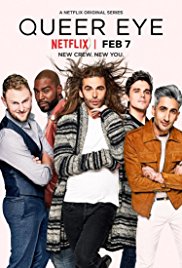 The Fab Five is back and better than ever. February 7th, 2018, Netflix released their new original, Queer Eye, starring five of the most fabulous men I have possibly laid my eyes on.  Changing the lives of others one straight man at a time, these five men are making waves within the LGBTQ+ community. Not only are they spreading positivity within the community, but they are truly changing the lives of others for the better.

With only eight episodes on Netflix so far, this hilarious series is perfect for a quick session of binge-watching. Bobby, Karamo, Tan, Antoni, and Jonathan are a group of lively queer men that are bound to entertain anyone who is interested, whether they be queer or straight. As a gay woman, this show surpassed my expectations in regards to how the media portrays the LGBTQ+ community, and these five men are too hilarious not to love. It is refreshing to see queer people unapologetically being involved in creating content for everyone to enjoy.

The first episode, “You Can’t Fix Ugly,”  is bound to hook anyone into watching the rest of the season. Everyone has already fallen in love with Tom, the man that appears in the first episode. The episodes usually consist of a wardrobe makeover, a haircut, and a house renovation. The Fab Five gives emotional support and advice to each straight man they help out, and often become good friends with them.

Queer Eye is a show full of compassion, love, and friendship. From beginning to end, the men are entertaining, and extremely fashionable might I add. After watching this show, you’re bound to want to be friends with the Fab Five.