UPDATE: Students participate in the National Walkout for school safety 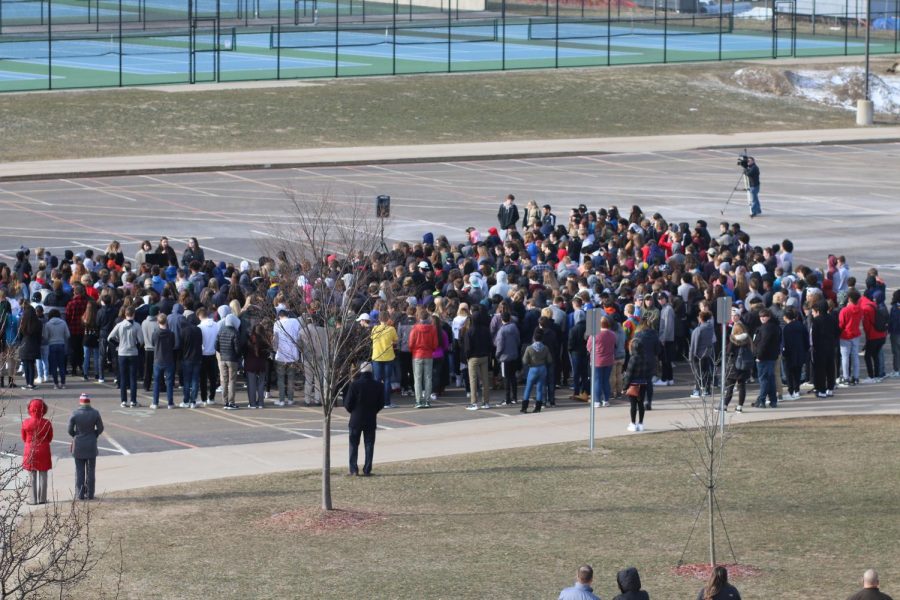 Many students braved the cold to participate in National Walkout Day. Photo by Amanda Thorpe.

At 9:57 this morning, roughly 400 hundred students left their respective third hour classrooms and gathered in PN’s bus loop for a demonstration to remember the victims of Parkland High School and to advocate for gun regulation in order to prevent school shootings.

The student walk out was planned by student senators. “It kinda fell into our laps,” said senior student body President Lauren Michelli. “We are representatives of the school, and I think we felt the need to take action and organize this event because no one else was.”

The goal of the student-organized walkout was not only to honor the 17 victims of the Parkland school shooting one month ago, but to motivate students by spreading awareness. “A lot of people don’t know a lot of facts about gun violence and gun control,” said senior senate secretary Jessie Beadle. “Our goal is to inform people why we are doing this and how they can make a difference.”

Students of all grades opted to leave school in order to protest. “I’m here because I believe that guns shouldn’t be so available to the public and that the people who died from them need to be honored and remembered,” said sophomore Maggie Johnson. Another student, junior Elise Voinaroski, walked out because “it’s time for change and I think that our generation is the one to do it.”

While hundreds of students walked out, even more remained inside. For some students, it was not because they didn’t agree with the protest, but because, as junior Derrick Henderson said, “it’s kinda cold outside” (It was in the mid-30s at the time of the protest). Other students who stayed inside did so because they were fundamentally opposed to the protest. Junior Josh Gouin said, “The school is pushing policies with emotional connections as opposed to facts.” Another student, Max Todas, supported the message but not the delivery. “Having it run by the school district won’t help much, but I would help after school,” he said.

At the walkout both Michelli and Beadle gave speeches, read the names of all 17 victims, and called for a moment of silence. In addition to their words, two other students, Malia Sinkler and Lily Antor, gave speeches about the importance of honoring the Parkland victims, engaging in student activism, and calling on politicians to pass legislation in order to prevent school shootings. “On December 14th, 2012, I remember coming home from a fifth grade trip to Sherman Lake Camp. I sat down and my grandma turned on the news to the horror that 26 students and staff had been shot and killed at Sandy Hook elementary by a semi-automatic firearm. I, and many others will never forget that day. Sandy Hook is our generations 9/11. It is what I would consider the beginning of the decline of shock every time we heard a new story about a mass shooting or a threat to a local school. The difference is, is that after 9/11, things changed,” said Sinkler.

At 10:17, students filed back into the school to continue their day. Before ending the walk out after minute 17, Beadle made sure to notify the assembled students that Senate will be hosting another event on April 20th, which is the anniversary of the Columbine High School shooting and the date of another national event. “Make signs, wear orange, and make your voices heard,” she said.

Click here to read previous coverage of this event.