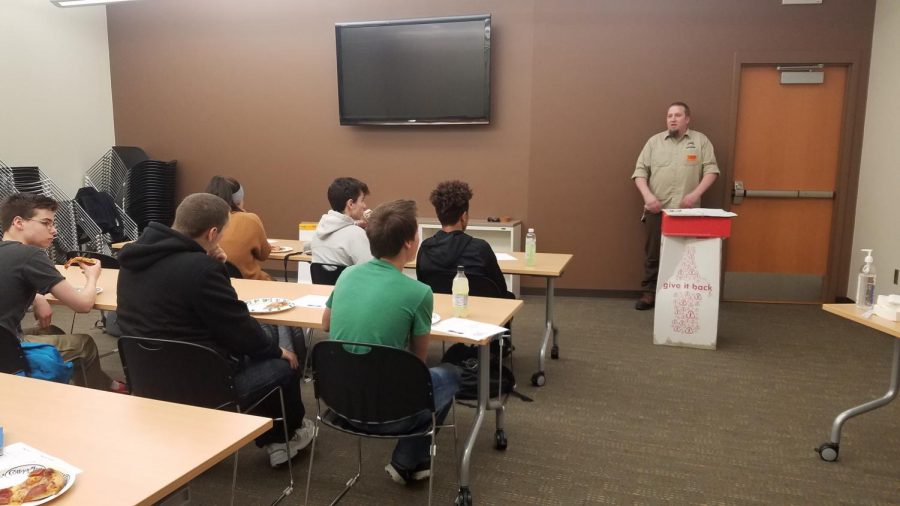 On Friday, March 2nd, students received free pizza and advice on how to make a living in the skilled trades of plumbing, electrical, and HVAC.

The event was held in the community room during both lunches, and guest speaker Mike Peters gave an informative yet interesting speech about working in the HVAC industry, explaining the different steps you can take to have a solid, reliable and well paying job.

Senior Dameon Weeks says, “they showed us some of the places we could go to get education in the trade you might want to go into. Some don’t need college but let you go to a trade school which cuts out some of the unnecessary classes.” While Peters was not saying that college was not necessary or a good idea, he was saying that, depending on what kid of career you plan on going into, you may not need as many classes as the average person. Peters also informed the students in attendance about different colleges that give you the opportunity to have a hands on education, which as Peters pointed out, can be the best way for some people to learn.

Weeks states, “The reason I was interested was because I needed the information as a back up plan in case my original one, which is joining the Marine Corps, fails. The most interesting part for me was how high in demand people are for those fields.” The supply and demand ratio for people (especially women) in the trade business is way off balance. Peters told students that they will pretty much take anyone with some sort of qualification, because they need workers so badly at this point.

“I would indeed recommend that other students attend the next one,” says Weeks. “They can learn about good career opportunities or a back up plan if they need it.”