Even the toy store is gender segregated 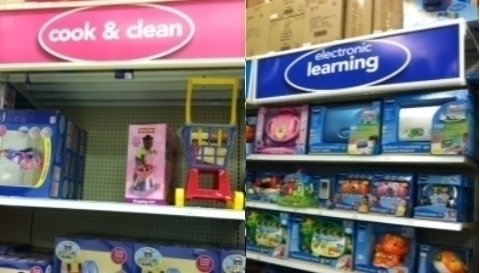 It’s 2018, and gender equality is all the rave, so the fact that there is two different sections for girl and boy toys can bring a few questions to the forefront. Almost every toy store in The United States is neatly divided into sections, one for boys, one for girls, and maybe a third for “gender-neutral” items like board games, etc. The boy side is usually filled with building blocks, cars, train sets, and action figures, and the girl’s section is full of Barbie dolls, baby dolls, play household items, and dress up apparel.

The toys are not just separated in the stores, the segregation reaches all the way to marketing, where advertisements are filled with stereotypes and directed towards young boys or girls with seemingly no inbetween or common ground. Child development research has shown that playing with dolls increases compassion and selflessness in all toddlers, so why are we trying to cultivate those values in girls only?

Conversely, playing with blocks helps teach children problem solving, creativity, and imagination from a young age, so why are we only trying to instill those traits in boys? Blocks and dolls are not the only toys that can teach children important traits and skills, so why are some toys only directed at and marketed for half of the population?

Missing out on valuable learning opportunities isn’t the only problem with toy store segregation. By separating childrens toys, we perpetuate the unreasonable stigma in our culture that prohibits a young boy from playing with dolls or a girl from playing with a train set. It has gotten to the point where if you look up “does playing with a doll make…” the second result to pop up is “does playing with dolls make a boy gay.” We could take steps to end that stereotype by something as simple as merging sections in toy stores, and directing advertisements at both genders.