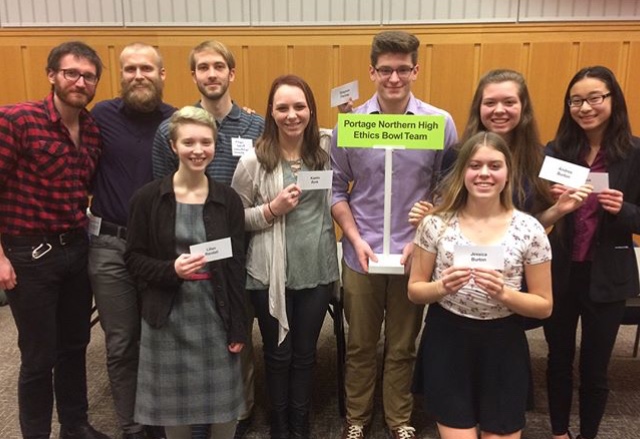 In our time-crunched society, many people don’t have the time to sit and contemplate the ethics behind their decisions or world situations.  Ethics is defined as moral principles that govern a person’s behavior or the conducting of an activity. Portage Northern’s Ethics Bowl Team spends their time discussing and debating the ethicality of a variety of subjects.

The team consists of senior Andrea Burton, sophomore Jessica Burton, sophomore Grace Fan, senior Kealin Rork, junior Lillian Randall, and sophomore Grayson Fischer. Ethics Bowl is an extracurricular club that has been implemented in 24 high schools across the United States and Canada. Founders Andrea Burton and Kaelin Rork say that the Bowl is a great way to work through the ethics of life in the United States. Rork says that she “always enjoyed intellectual  discussions, especially about morality or different philosophies” and she’d “always been treated badly and insulted for [her] views” and that the Ethics Bowl and her team had allowed her to open up and share them because she knew she wouldn’t be judged, except, of course, by the tournament judges.

This year was the first year the team had gone to the tournament, which was held on February 24th. This was also the year they made it to the second day of competitions, which is seen as a finals round of sorts. Only eight teams in total move from day one to day two. Sophomore Jessica Burton says the tournament days are “a little stressful, but it’s actually pretty calm.”

Ethics Bowl gets its roots in the philosophical thought process. Philosophy is defined as the study of the fundamental nature of knowledge, reality, and existence, especially when considered as an academic discipline. Sophomore Grayson Fischer says he didn’t even know what philosophy meant before the Ethics Bowl team. Topics that can be discussed range from nature cases to law moral cases to people interaction cases. For the first tournament, one of the issues that the teams discussed was the ethicality of reintroducing wolves to Isle Royale, as the current wolves are inbred because of climate change melting their ice bridge.

Ethics Bowl has meeting every Monday in Nancy Nott’s room on the third floor. These meetings are practices for certain topics. Even though not everyone who attends meetings attends tournaments, they are still valuable members of the Ethics Bowl program at Portage Northern.