Religious diversity at PN is met with criticism 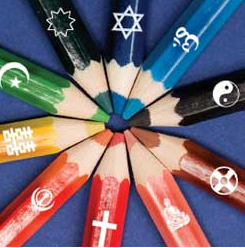 Diversity in religion plays such a huge role for Portage Northern, but some students are criticized for openly expressing their own beliefs.

Openly portraying her own religious practices at Portage Northern has helped out junior Zainab Fayyaz, who is Muslim. Continuing to show her cultural beliefs even in the face of discrimination and judgement has helped her become more confident. “I am very confident to show off my religion. Ever since I was born, I have been practicing Islam with my family and we have always been open about it,” she says.

Going through the day at school seems to be quite normal for some students with different beliefs then their peers. Freshman Victoria Tabor explains that others’ opinions doesn’t affect her, but does impact her feelings on the inside: “I am a Christian and God’s opinion is the only thing that matters to me, but it is little hurtful when people don’t like me for who I am,” she says.

The idea that students with diverse religious beliefs would to receive hurtful commentary from their peers is an unfortunate reality.  Senior Kushi Matharu says, “It’s hurtful and offensive as they are hateful comments based on nothing but hatred and oblivion, however I try not to let it bother me too much.”

Diversity in cultural beliefs in Portage Northern is important because it expands on who we are as an single person here in Portage. In a school this size, students have all different kinds of religious views, and many additionally have no religious preference at all. Christians, Jews, and Muslims might have different spiritual beliefs, but otherwise they are just the same as everyone else. Commentary from one student to another should be respectful and kinder; even though we all have different opinions on perspectives in life, we all have to share this school peacefully.