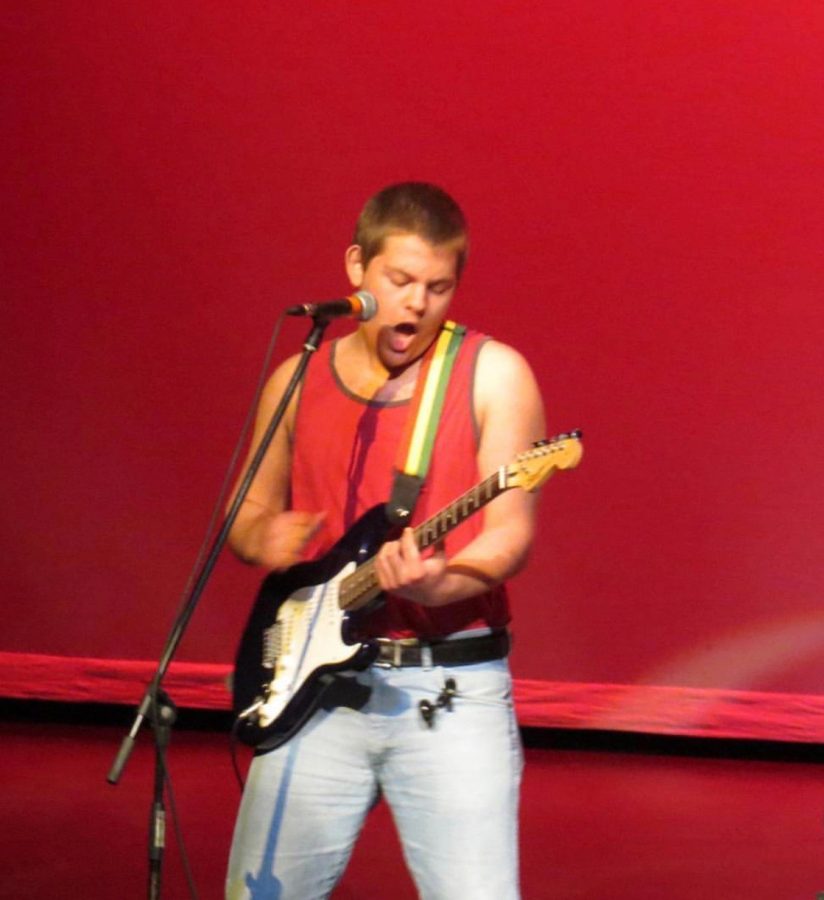 “Drew and I were just hanging out in my basement one day jamming out and we started playing a song from Scott Pilgrim vs The World and we both looked at each other. We both knew what the other was thinking,” says Junior Neal Truitt, guitarist of the local high school band Known Orbit. “That evolved into wanting to show that just because rock is absent from pop culture, doesn’t mean that it is dead.”

Truitt’s interest in music first started when his sister introduced him to The Strokes in his final year of middle school. “I was completely in love with the way the music made me feel,” he says. Soon after getting introduced to the music world, Truitt picked up the guitar, but “didn’t get ok” at it until the middle of sophomore year when his band OKAY, which included juniors Andrew Oman on bass, Nick Stimley on drums and Billy Simpson on lead guitar, made its debut at the 2017 talent show and performing neighborhood shows for friends and family.

The newly named band “Known Orbit,” classifies itself as “1660’s garage rock and a little bit of punk rock.” Truitt says, “modern pop today isn’t really my cup of tea, but I’m not going to get upset about what other people listen to. I do feel it’s too simple now, with singers not even writing their own music, now that makes me upset.” The group is reliant on each other to come up with new song ideas, and they continue to elaborate on their individualism by incorporating each members’ lyrics. “What I really like about Known Orbits music is that it doesn’t really have set genres, we have 4 different song writers that all like different music,” says Truitt. Writing songs alone can already be difficult, but when you have 3 others helping, it helps with stress while making the band more unique and original. “They are all brilliant songwriters and no one should scrutinize each other for wanting to listen or to play them no questions asked,” says Truitt.

Being in a band with your friends isn’t always fun and games though. Getting time to rehearse, making sure school work is getting done, sitting down and writing songs, and even performing and things not going as planned are all struggles the group has had to overcome together.  “I used to get super stressed out about messing up the lyrics and embarrassing myself to high heaven but a good friend of mine in the band Lunar Vacation said, ‘if you don’t mess up at least once you’re not having fun.’ I work really hard to play the music right, but you can’t beat yourself over it, it’s just rock and roll, no big fuss,” says Truitt. In the end, Truitt constantly reminds himself that “the only reason why [he’s] in this thing is to have fun and make music.” Seeing the band on stage, you can certainly tell they are having the time of their lives.

Not only is the band unique in the sense of their music tastes, but they also have a unique yet mesmerizing way they present themselves on stage. With the drummer wearing an unbuttoned shirt with a tie in honor of the band Green Day, bassist wearing a more street style involving some sort of beanie, lead guitarist wearing a casual style and the other man behind the guitar wearing a combination of all styles but mostly getting inspiration from his favorite bands, such as Twin Peaks (not the show), they are an eclectic group to look at. “In the end, the only person you should be trying to impress is yourself, so if you get a kick out of what you wear and you dig it, it doesn’t matter what you wear,” says Truitt.

Pop and rap music seem to prevail on the charts, and many look down upon rock music.“Not everyone is going to enjoy the same music you like, it’s your music, so the only thing that matters is that it makes you happy,” says Truitt. Looking back on high school, there are many dull moments but not many people in this day and age can actually say they were in a band with their best friends. Truitt reflects: “Personally I knew I wouldn’t be happy if I wasn’t in a band at least once in my life, and my whole attitude and life is built around music. Everyone is different and that should be celebrated.”