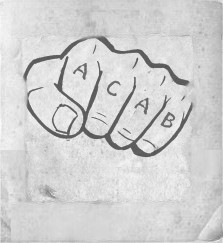 Imagine yourself in the shoes of a resident of Ferguson in the aftermath of the death of Michael Brown. The community is being torn apart over the question of whether or not the officer, Darren Wilson, should be charged guilty for the murder. As this debate goes on, you hear people wondering if the police are for or against them, if the police serve the community and make it a better place or if they put people in danger. With so many deaths of minority individuals at the hands of police, the general community feeling is no, so people begin supporting an anti-cop rhetoric, saying that everyone should hate the police. Many people are shocked by hearing people say that police are to blame for these abuses of power, and plenty think that this system of thoughts is wrong and should be frowned upon. However, instead of being against this movement, it would improve society to look at the roots behind these feelings and try and fix the situations that cause them.

Within the recent years, there has been an increase of coverage and awareness of police brutality in America. Due to this, anti-police stances have been more prevalent. Hating the police is not a new concept, with songs such as “Police Truck” by the Dead Kennedys in 1978, “A.C.A.B” by the 4 Skins in 1982 and “F**k Tha Police” by N.W.A. in 1988 showing the history of anti-law enforcement beliefs in America. However, when many people hear sayings such as ACAB, they automatically assume that this means that whoever is saying it means that they hate every single person that is a police officer, regardless of what they have done. In reality, there’s a lot more nuance and truth to the subject, and we should be more considerate of the people who do say it.

The reason behind the anti-police mentality is based on the controversies regarding police brutality. Police brutality in America can be seen in the Civil Rights movement in the 1960s. A famous example is the Selma to Montgomery March in 1965, where peaceful protesters were attacked on the Edmund Pettus Bridge by the police, armed with tear gas and billy clubs. They were practicing their right to protest, and the police attacked them. Outside of the Civil Rights movement, police brutality was also prevalent in the anti-Vietnam war protests. When protests occurred outside the 1968 Democratic National Convention in Chicago, where after a young man lowered a flag in a park near the convention, the police beat him. More recent cases include Michael Brown, Eric Garner, John Crawford, Sandra Bland, Tamir Rice and many other people. When you have so many cases of police brutality, even within the last 10 years, there’s plenty of reasons to have anti-police beliefs, especially for minority populations.

One of the primary complaints with anti-police mentality is the idea that there isn’t a reason to hate the police. They enforce the law and and keep people their safe. The L.A.P.D.’s motto is “To protect and serve,” so they must be the good guys, right? Unfortunately, reality falls short of goals.

First of all, the job of the police isn’t necessarily to protect and serve the people. The police aren’t meant to serve the people, they serve the state and the laws. If the law promotes harmful behavior, the police won’t interfere. When it was illegal to be gay or transgender in America, the police didn’t stand on the side of humanity and protect the people, they stood on the side of the law by enforcing it. The police actively persecuted these people, to a severe extent depending on location. Secondarily, the fact that law enforcement officials have killed innocent people is irrefutable. The police aren’t always in the right, and if you’re a group whose been marginalized or if you’re advocates of a group who has been marginalized, there are plenty of reasons to neither trust nor respect law enforcement.

Another complaint is the belief that you shouldn’t dislike the police since it isn’t right to make such a strong generalization. While they are a group of people, and all people are different, the police have shown that even the “good cops” still affect the system negatively. For example, the blue wall of silence shows how police are expected to go against the good of the public. The blue wall of silence, also known as the blue code, is the unspoken rule that all police in the U.S. are expected to not report on another cop’s misconduct or crimes. A prime example of the blue code in action can be seen in the consistent responses after police departments perform internal investigations. The vast majority of the time, the department finds that the officer who may have sparked the investigation or the department as a whole are not guilty of misconduct or misuse of force. The good cops are choosing to defend their fellow police officers instead of the being objective and going after corruption or brutality within the force. While there are undoubtedly morally upright individuals in the system, the logic that just because this fact is true means that the ACAB movement is unfounded in flawed.