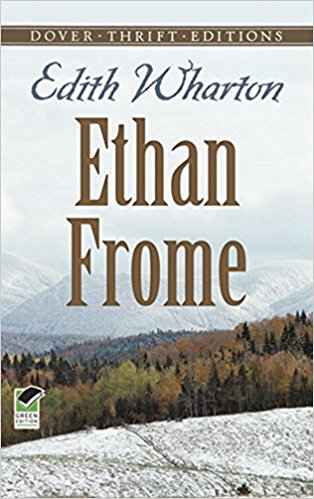 Recently, the IB english 12 students here at Portage Northern just finished the novel Ethan Frome by Edith Wharton, and in my semi-professional opinion, I am here to explain to you why it is literally the worst book ever.

The book begins by giving us readers a detailed description of Ethan Frome himself, then jumps back in time 20 years prior, to the time of Ethan’s big ‘smash up’ that left him and his former lover, Mattie Silver, permanently scarred. The book in a nutshell is about an unhappy man named Ethan Frome, trapped in an unhappy, tension filled marriage with his naggy wife Zeena, while having an not so secret affair with his wife’s cousin Mattie Silver, with whom he ultimately decides to pull a failed Romeo and Juliet suicide attempt with, that leaves them both permanently scarred with Zeena as their caretaker.

The book is boring and anti climatic. Literally, the only exciting thing that occurs is Zeena’s dumb glass pickle dish shattering. The author couldn’t even give the readers what they really wanted in the end, a satisfying, heartbreaking, climatic scene of Mattie’s death during the suicide attempt. Instead, we got a failed copycat Romeo and Juliet suicide that left them both ‘smashed up,’ :boring!

I really don’t understand why IB must choose the most painfully mundane books for students to read. There are thousands of incredible books out there that could teach us tons of lesson about literature. All in all, reading Ethan Frome was painful, so if you’re not required to read it for school, I recommend you never open it.