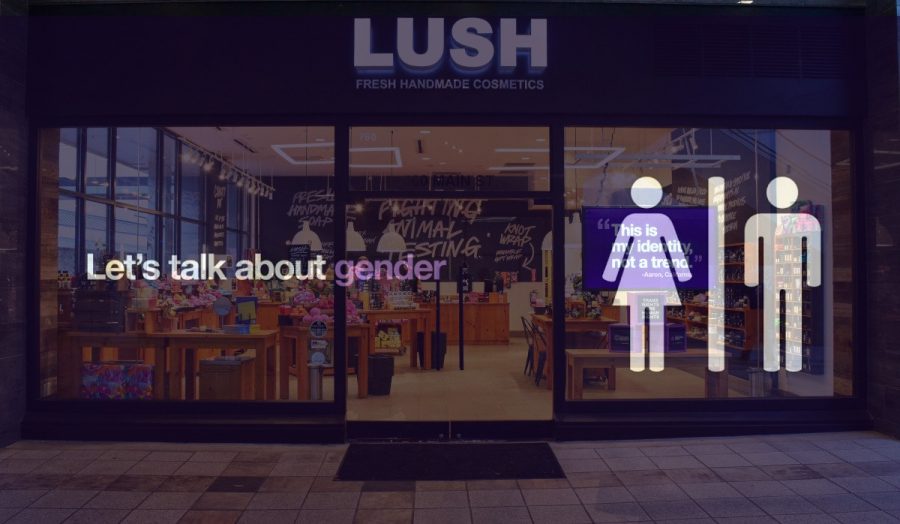 With a goal of contributing $450,000 to support transgender organizations, LUSH cosmetics recently began openly campaigning their ideology towards the transgender and non-binary communities.

This is more than a marketing statement, but a world awareness campaign. In 76 countries, it’s a crime to be gay. In 10 it can cost someone their lives. This means, for millions of people, that “expressing their love could cost them their freedom,” says a article by the company LUSH. Additionally, according to the LUSH cosmetics site, in 2017, over 300 transgender people were killed by violent means and at least 26 of those were in North America.

Not only have they advocated for these groups of people, but also for women and men themselves. Studies show that females pay more for cosmetics than those that are marketed to men—31 percent more on average, a study by the Fawcett Society found. Equality campaigner Stevie Wise was outraged by this, so LUSH has began to focus on more gender neutral products to cancel out the discrimination between men and women.

After the day of love on February 14th, LUSH began releasing their annual pictures of gay couples using their bath products.  In fact, after releasing their first “love soap” in 2015, thousands lathered up with 107,479 sparkling gold bars. The sales raised $400,000 USD for the Love Fund, which channels the funds from each “love soap” to support LGBT communities. In 2018, things at LUSH changed. With more political controversy than ever before, they began to openly campaign for the LGBT community. “You don’t see big brands like these taking stances today. It’s empowering those to be more themselves,” says Krista Proksch, a senior at Portage Northern High School. She advocates for transgender and gay people to feel safe and content in their own skin. LUSH is showing the importance of this ideology today on the world scale.

LUSH even began selling their very first transgender bath bomb in honor of their new campaign of “#TransRightsareHumanRights.” The product, called “Inner Truth Bath Melt,” is pink and blue: the colors on the trans flag. With 100% of the proceeds going straight to advocacy groups such as the National Center for Transgender Equality, LUSH is reaching a new level. “I think it’s amazing for them [LUSH] to speak out for those who don’t feel included,” said Proksch. Expressing words of excitement for using more products, Proksch looks forward to see what LUSH does next.

Not only did they begin selling these new bath soaps, but every window of Lush’s stores have had their displays replaced with quotes from transgender LUSH employees talking about their identity. This enables their customers to feel safer and more comfortable. “It’s a really simple gesture to provide support,” says senior Audrey Everett.  LUSH says, to be a trans ally, “be nice, open-minded and mindful of challenges faced by others.” To learn more, visit National Center for Transgender Equality.