A committed brother: How Jake Clifton supported his twin through her gender transition 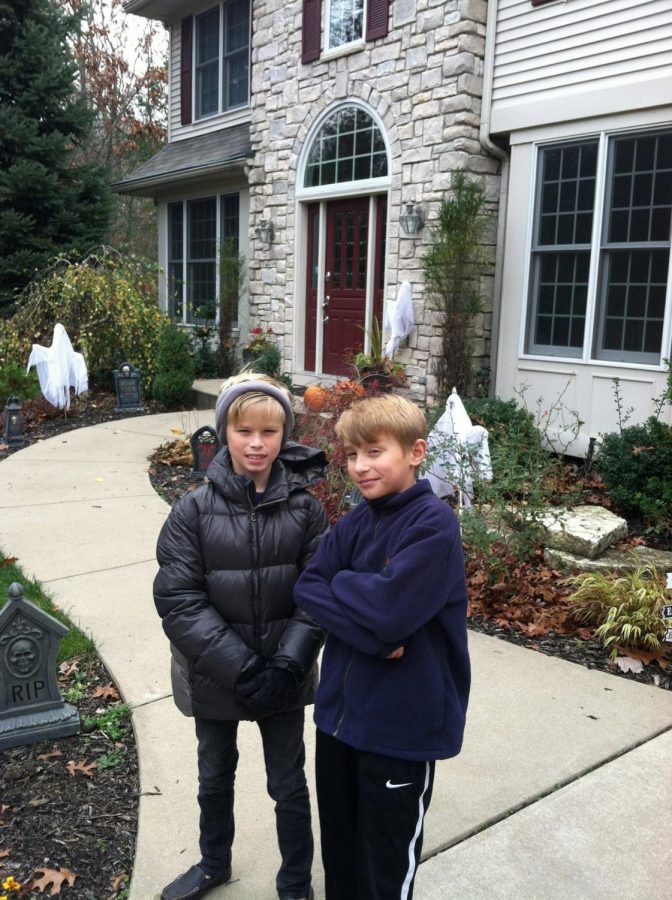 Pictured on the left is Kylie and on the right her twin brother Jake. This was taken when they were much younger; at the time Kylie was known as Kyle.

Lily Antor, editor in chief
Freshman Kylie Clifton’s story is one that has transcended headlines: from Michigan Radio all the way to People Magazine, her transition from Kyle to Kylie as an 11 year old student at North Middle School received nationwide attention.

While her transition has been well-documented, few people know just how her transition impacted one of the most important relationships in her life: the one she shares with her twin brother.

Jake Clifton is an average freshman boy: he is in band, takes a couple honors classes and gets by quietly. He, in many ways, is the antithesis of his twin sister. “We’ve always been different, and for a long time I thought that was just our personalities,” said Jake. From their tidiness to their clothing style and hobbies, the Clifton brothers were opposites in more ways than one. “Even as twins, our looks were very different,” added Jake. “We had different colored hair, skin tones, and our eyes are even different colors.”

While Jake and Kylie are still very different, Kylie’s struggles with her biological sex only widened the divide when they were younger. “I mean, [Jake] isn’t the sportiest type in the world, but I remember almost intentionally not enjoying sports,” she said. Kylie would try to participate in more feminine things, like dance, but there was always a point when she would have to assume the boy roles. “It’s like I was searching for things that I wanted but that I could never fully attain with my gender,” added Kylie.

She slowly began to realize as she got older that she was not in the right body. “It was fall 2014 and we were moving: it was realization upon realization and it was just a lot of soul searching all at once,” said Kylie. “I had been watching a movie at the theater, about nothing related, and I was thinking and thinking until in one moment everything just fit together in my mind.” The realization that she was in the wrong body was very overwhelming. “I went home crying, not out of fear but because it was a lot of emotion to handle all at once.”

Over the next few months, Kylie began to accumulate more knowledge about who she was and what it would mean for her. Then, around Christmas, she came out to her mom and shortly after to her dad. “It all went over pretty peacefully,” said Kylie. “[Jake] was the last to find out, actually.”

Jake’s first clue that his twin was female was one he did not give much thought to three years ago. “I was about to talk to Kylie, so I went to her room and I remember seeing a head mannequin on her desk,” he said. “It had a wig on it, which was light blonde and pretty long.” He assumed it was a costume for a play Kylie was in. Little did he know that her wig was one of things she was using to transition.

“At the time I would go straight home and I would put on the wig and wear any of the girl clothes I had,” said Kylie. “It would be like getting done with work and changing into regular clothes.” At the time, she had built up a sizable side wardrobe to go along with the wig. “I would stay in my room a lot, not because I didn’t want to come out, but because I liked having my own time,” she added.

One day Jake accidentally walked in while Kylie was dressed as a girl. “I remember getting upset at him because it was not that we were refraining from telling him, but that we had just told my sister and I was not completely ready yet.” At that point, it was too late: Jake knew something was occurring with his twin.

“I think they were hesitant to tell me because I was younger and it could have possibly affected me more because she is my twin,” Jake said. “Later that day, though, I asked my parents what she had a wig and girl clothes for and they told me.” What his parents told him about his twin did not surprise Jake much at all: in fact, it seemed rather fitting to him.

While Jake was completely supportive of his sister, Kylie’s transition did present its challenges. “I did not have nearly as hard of a time as her, obviously,” said Jake. One of the biggest obstacles he had to deal with was fielding all the questions he got at school. “When she transitioned to being a girl at school, it was literally one random day in the middle of the week, which probably surprised some people,” he said.

Kylie had been putting off fully transitioning at school until her hair was long enough for her to get extensions. “After I got them it was not something I could reverse,” she said. “I couldn’t wear different clothes at school than I did at home to hide the fact.” The day she came out at NMS was not a hectic day, but rather an average school day. While lots of eyes were on her, nothing was more rewarding than being able to be herself. “It was very exciting,” said Kylie. “I was glad to know it was not just me going into it, because all the teachers, counselors, and principals were with me for that day.”

For Jake, the day was remarkable. “I just remember arriving there and I felt that things were different,” he said. “It was a good kind of different, but I knew it would take some getting used to.” The question Jake got asked the most that day ultimately became the one he and his sister would hear the most frequently: “Did she get the procedure?”

“That’s always the big question,” said Kylie. “My problem with it is that people think it is all biological, and that that is the final step, versus mental and emotional transitioning.” Both twins noticed just how much weight people put on her actual biological change. “I find that interesting now to think about, like how that is what people distinguish things on, like you cannot change unless you get surgery,” said Kylie. “But there are age limits and growth requirements and years upon years of counseling and preparation required for procedures.”

While her transition at school went very well, Jake still struggled with adapting to all the change occurring around him. “It just wasn’t the best time for it to be happening, we had some other family matters,” he said. “Another thing was that I kept accidentally calling Kylie he; I don’t think I ever called her Kyle, but it took some adjusting.” While mixing up her pronouns was by no means intentional, everything just took some adapting. “It was a long process to get used to, but now it’s just normal everyday life,” he added.

While it was not always easy dealing with his sister’s transition, one aspect of their relationship never changed: Jake’s admiration for his twin. He described how, at the beginning of sixth grade, no students were allowed to use electronic devices. “Kylie, this was before her transition, sent a heavily-worded email to the principal to get it changed,” he said. Her email seemed to do the trick, as the policy was soon rescinded. “She has always been a person who has tried to change things for the better for not just herself but everyone else,” said Jake. He describes his sister as independent, influential and outspoken. “I’ve always admired her for that, and I think our family and classmates do too,” he added. “She is not a person that is easily put down, she is so strong that she can handle almost anything.”

Upon transition, Kylie admits she started to set up more boundaries with people. “I just had not been happy for such a long time that I just wanted to emphasize that I was just going to be me right now,” she said. “I feel like Jake was probably impacted by that.” Despite all the adjustments, Jake recognized all that Kylie was going through. “I knew that she needed alone time and I understood that,” he said. “I would only get a little jealous because our dog Luna would always go to Kylie’s room instead of mine.” Even the dogs seemed to sense the change in the Clifton household.

“Overall, I think we got a better understanding of each other throughout the transition,” said Kylie. “I feel like the fact that I found my way to a good happy place influenced our relationship for the better.” Jake agrees. “It was mostly just me getting used to Kylie as a twin sister rather than a twin brother,” he said. “But we have always had twin connections, we have very similar understandings and that never changed.” Jake further explained that, while it took adjusting, their relationship only improved. “It was strange not having a brother anymore, but it felt more complete to have a sister.”

All in all, Jake and Kylie are twins with a relationship like that of any other sibling pair: they love each other. “I appreciate everywhere you’ve been for me, you’ve been so understanding,” Kylie said to her brother. “And I feel like sometimes I undermine that.” Jake was quick to say how proud he was of his twin for all she has endured just to be herself. “It’s nice to know that we always have each other’s backs,” he said. Despite their many differences, the Clifton twins are always there for one another. “Even though we are different in many aspects, we always come together in the best way possible,” Kylie said. It seems like, for all they have been through, that will not be changing anytime soon.