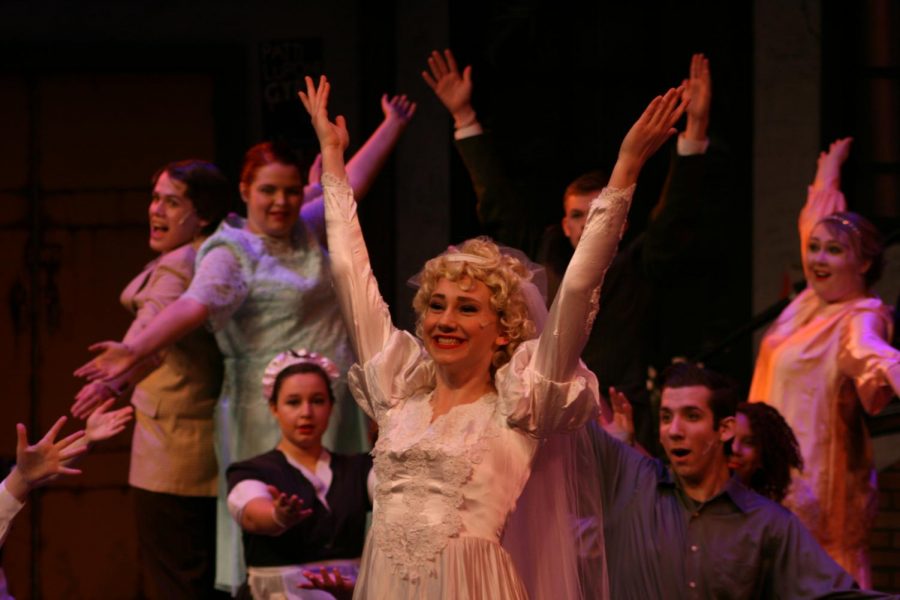 Junior Rosie Coryell has proven her capabilities on the stage at PN. Last year in Into The Woods she sang beautifully as Cinderella, and this year she 'shows off' as a star turned fiancé. All photos in this gallery by Lily Antor.

The fall musical, the Drowsy Chaperone, took students on a 1920’s adventure with a compelling cast and catchy tunes.

“There are so many elements that help hone a good comedy,” said English and Drama Teacher Celia Weeks. These words come from the director of this year’s musical, The Drowsy Chaperone, which opened on Friday, December 1st. The Drowsy Chaperone is about a wealthy woman by the name of Mrs. Tottendale who has to attend Janet Van de Graaff’s wedding to Robert Martin, and Janet giving up her life of glamor and fame to do so. It begins with a narrator because it was a frame play–a story within a story–then with the curtains revealing the main setting. The comedy includes her dilemma in which she questions her love and spending eternity with Robert, and a mix-up between brides when Aldolpho seduces Janet’s drunken chaperone, when he was supposed to stop the wedding by seducing Janet. It ends with various weddings happening, including Janet and Robert, Aldolpho and the drowsy chaperone, and Mrs. Tottendale herself to Underling, who is the butler to Mrs. Tottendale. The Drowsy Chaperone engages the audience for a whole 100 minutes and within the first 5 minutes, the audience is captivated. “The musical was amazing and everyone was attentive the entire time,” sophomore Taryn Ross said.

The main characters to put this successful production were Mrs. Tottendale played by Junior Sydney Dudley, Janet van de Graaff played by Junior Rosie Coryell, Robert Martin played by Senior Ryan Daniel, the drowsy chaperone played by Senior Audrey Everett, and Aldolpho played by Senior Isaac Reid. There were several others to contribute to this play. September was overwhelming for many of these students due to long rehearsals while still maintaining high grades. Isaac Reid who played the character Aldolpho said, “It is not easy managing the workload, I have almost all IB classes. [However it helps] my teachers are lenient and give long deadlines.” Tech Sunday, one of the most important rehearsals to ensure the play would run smoothly, was 9 hours long. These hours definitely paid off when the cast wowed the audience with intense, fun dance numbers and strong vocals. Some of the main songs were done by Rosie Coryell, Janet, in “Show Off” and Ryan Daniels, Robert, in “Cold Feets” and Isaac Reid, Aldolpho, in “Aldolpho.” When it comes the motivation of why Weeks goes through these long months of rehearsing with a 2 and 4 year old at home, she says her drive is ensuring the PN drama department stays as impressive as it is. She also said, “I am more about the process than the product with the goal that kids are learning how to work together [and] become better people as well as actors.” The lessons the cast and crew learn throughout producing a musical they are passionate about comes out to be just as meaningful as the success of the musical.

Portage Northern’s, The Drowsy Chaperone, was a way for students to express their passions of theatre. Along with that, the musical gave all students something to look forward to: a night of entertainment and watching their friends shine on stage.