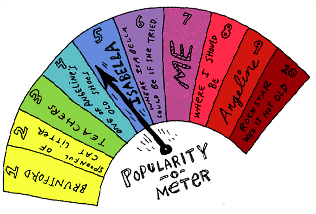 Zac Efron and Vanessa Hudgens stole our hearts in the classic Disney channel movie “High School Musical.” The popular high school boy falling in love with the nerdy new girl is a common plot displaying the stereotype of how popularity takes over high school. Putting all of this aside, I want to know how important popularity really is.

I honestly don’t understand the science of popularity. What is the big deal? Why is everyone striving for this title of ‘popular’? Is popularity like a boost of self esteem?

In the eyes of a typical high school kid, popular means having lots of friends, always looking good, and being known and liked by everybody. I wonder if a single student has stopped to think that a kid could be popular because their kind and caring personality can appeal to many people. Kids seem to immediately turn to looks, number of friends and sometimes even drugs to define popularity. Junior Avery Walman says,“Students tend to go far lengths to become popular, most people who do this don’t seem to care about their real image in school, only about how many friends they have or how good they look,” to express her feelings on how students she has interacted with think. Kids who decide to follow these paths don’t just come up with these ideas themselves but rather observe their surroundings. When they see that the upperclassmen or their older siblings followed this path, they come to the conclusion that life is as they see it, dependant on superficial characteristics.

Gareth Cook, a journalist for Scientific American says, “… most do not realize that scientists have identified two different types of popularity, each associated with very different outcomes,” as he talks about the future effects of popularity on people.

The two kinds of popularity are defined by status and likability. The new era of reality television and social media have pushed kids towards the choice of aiming for status popularity. Sophomore Rawan Alsaedi says, “I agree that these new forms of entertainment are showing kids how it is easier to rely on status based popularity,” to express her opinion about what influences popularity.  Research shows that unlike the positive outcomes associated with high likability, status related popularity is linked to cases of future aggression and addiction.

So what drives students to want popularity is essentially watching other people get praise and admiration as their status goes up and out of reach. Some students are willing to let go of the friends they already have to make new ones that can boost their status level up to where they want to be. “Many people do want to gain popularity to get attention, unfortunately they would even bully others just to try to get that attention,” says sophomore Anika Gullapalli as she explained her observations on students in our own school. Its crazy how a person’s perspective and understanding of these types of things change completely when they see them happening in front of their eyes versus when they hear about them or see them on tv.

I don’t understand what people want to do with all of this ‘power’. You would think they  have enough to pass it on to other kids to help them out with confidence, but they do the opposite. People try to push others further down the social ladder and feel that they gain more power and popularity from that.

Once school is finally over, the job interviewer won’t ask you about your place in the high school and college student hierarchy! Your friends and family won’t suddenly abandon you because you were a ‘nerd’. So why are we racing to “Bop to the Top”? We need to just enjoy life the way we have it.

In my honest opinion, popularity is overrated. We need to get past the disaster we call high school and enter the real world because as Troy Bolton says “We’re All in This Together.”