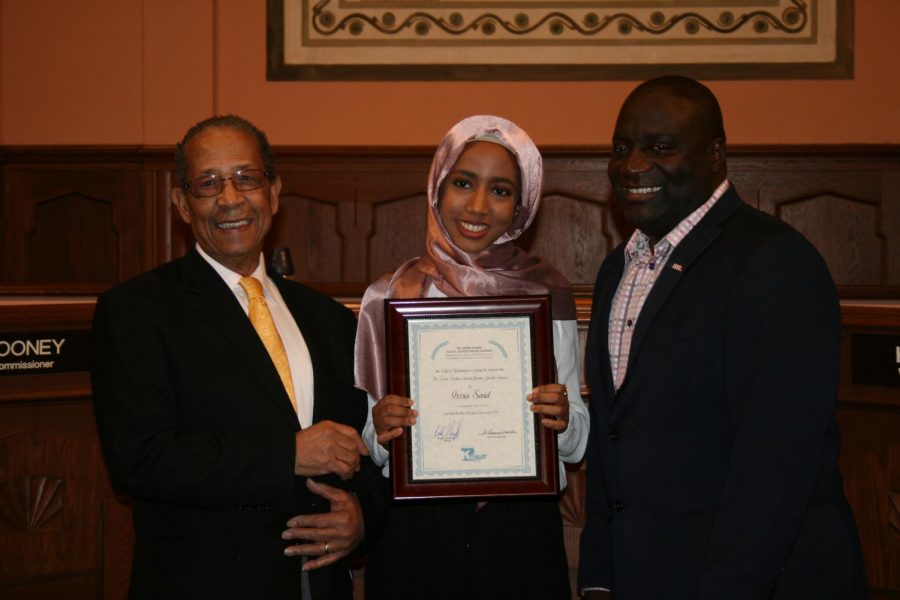 From left: Dr. Lewis Walker, Issra Said, and Kalamazoo mayor Bobby Hopewell. Said was presented with a plaque signed by both men, along with $200 and a yearlong NAACP membership.

Issra Said, a senior IB student, was honored for her civil rights work at Kalamazoo City Hall on Tuesday night during the City Commission meeting. Said was presented the 2018 Dr. Lewis Walker Social Justice Youth Award by Dr. Walker himself, a longtime local activist, and Bobby Hopewell, the Mayor of Kalamazoo.

The honor is given out annually in honor of Dr. Walker’s work and is awarded to a student between the ages of 12 and 19 from the Kalamazoo Community who has demonstrated achievements in racial justice, community service, volunteerism, and leadership.

Said said she was “honored” to not only win the esteemed prize, but to be nominated for the award by teachers Amanda Thorpe and Ben Neal, along with Principal Jim French. Four other Kalamazoo County teens were recognized as well, but Said was the overall winner of the award. Loy Norrix newspaper adviser Tisha Pankop, who attended the presentation because one of her students was also nominated, said that Said’s work was, “amazing.”

She was awarded a plaque signed by the Mayor, a monetary prize of $200, and a year-long student membership to the Kalamazoo Chapter of the NAACP. English and social studies teacher Amanda Thorpe, one of three people from the school that nominated Said, said that when she found out about the award, who to nominate was a no-brainer. “Issra is so involved with civil rights work in so many ways, from how she spends her free time to her forensics pieces to what she writes about for the Northern Light to Empowered Club,” she said. Thorpe has taught Said for the past three years and runs the Empowered Club that Said is actively involved with. “She really walks out her passion for equality and education about racial issues,” she said. As a member of our school newspaper staff, Issra writes a recurring column called “Culture and Society” where she discusses the intersection between culture, society, and race. In her non-column writing, she also tackles tough topics that deal with diversity and under-represented groups. She is a dedicated reporter who does thorough research and is professional in her approach, predominantly writing about social justice issues and using the Northern Light as a platform to not just raise awareness, but to give a voice to traditionally marginalized groups.

She also uses her own story to empower others: the personal narrative that she wrote about Islamaphobia and wearing her hijab even won her a state championship from the Michigan Interscholastic Press Association last year. As a co-leader of Empowered Club, which serves as a positive, safe space for students of color and their advocates, she hosted a school wide fundraiser for The Advancement Project, and this year hopes to support our local branch of the NAACP. She also set up a tutoring framework where students in EC volunteer to be “experts” in a subject area and then their peers sign up for subject-area tutoring. She prepares and leads discussions for Empowered Club meetings and also serves as the co-director and spoken-word segment leader for the school-wide Black History Month assembly. “Issra is really knowledgeable and helpful,” said Empowered Club member junior Sheila Mwanda. She has also lead by example, attending civil rights presentations in the community, bringing their messages back to Empowered Club, and encouraging her peers to go as well.

The forensics team is another platform for Issra’s civil rights message. In her competition category of Oratory, she has placed at state in each year of competition so far, and every year she has chosen a topic that concerns social justice. Her sophomore year, she talked about global bias in media coverage and finished fourth in the state. Her junior year, she discussed color discrimination within minority groups and finished in fifth place. The forensics season is just starting this year, but her senior year piece deals with fast fashion and how it contributes to modern-day slavery. Issra has also championed cultural issues within her community service and volunteer work. She has been an ESL tutor at the Kalamazoo Islamic Center for Syrian refugee preschoolers as well as a private tutor for an Arabic-speaking student at Western Michigan University, where she provides help with English courses and also facilitates understanding in other classes.

She was also and intern and then volunteer for the Dinner Table Documentary, a national organization that aims to change the representation of women of color in the media. Issra writes articles for their website, works with teams to complete social media initiatives and special projects, and organized the new campaign video that will be featured on their website this year.

As for Said, she described the ceremony as a “thought-provoking experience.” For her, it was very flattering to hear herself being praised by the people who had read her nomination. “I never thought of myself in the way that Dr. Walker and the mayor spoke about me,” added Said. For her, the recognition was an honor.