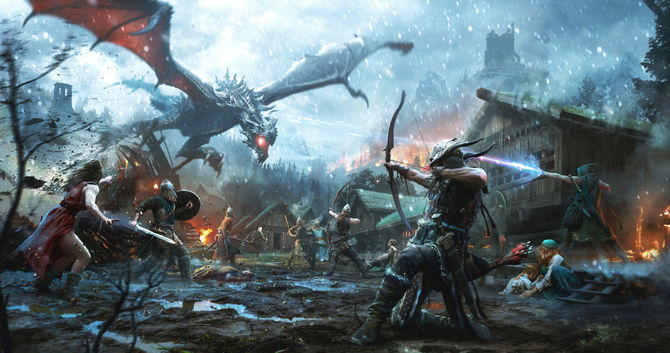 If there was ever a game that captured my attention time and time again and always managed to draw me back into the gaming abyss, it would be, without hesitation, Elder Scrolls V: Skyrim. It’s the one game I go back to, time and time again. And then, the same year I bought the game, Elder Scrolls Online was released. My little nerd-heart was happy. I couldn’t wait to delve into a game that would have all my favorite features from my favorite game; but I could play it with friends!
…then I saw the price.

Sixty dollars was the starting price, but then on top of it came the fifteen dollars for monthly subscription, and if you wanted to get any good supplies at all, you had to pay twenty more dollars. The good equipment was impossible to get solely by grinding or farming for it in game. For those who don’t know, farming/grinding is the repeated process of trying to obtain a certain item in a game, and it often takes hours upon hours of time. Farming didn’t work, and some people even believed that the best equipment was kept out of loot drops, forcing you to have to pay to get the good equipment. Obviously, Bethesda had gone from gamebreaking geniuses to greedy cashgrabbers in a blink.

Apparently, the game was severely broken. I watched many people play it and just rip it apart for ruining everything Skyrim had been. For example, the gameworld is massive and huge, and there’s everything to do within it. But the problem was, because it was so massive, it would take forever for one person to get to their questing point. To solve this problem, Bethesda introduced mounts, such as horses and lions. Seems pretty cool, right? Well, lions weren’t even available unless you paid extra, and horses cost 10,000 gold…42,700 if you wanted a good one. Fighting enemies got you nowhere fast, as enemies would only sometimes drop gold. And guess how much gold you got from each enemy? Only 1. Well, what about bosses? Surely, there’s a big reward for trying your hardest to defeat an enemy, right? 2 gold. I couldn’t believe it. To get a decent mount, you’d have to kill 42,700 enemies (assuming they all drop gold) just to get a mount.

Questing couldn’t even be done together. Even if you were in a group, you couldn’t go back and help your lower level friends with an earlier quest. If your friend was unable to defeat a quest boss by themselves, you couldn’t help them at all. It was some of the worst game decisions I had ever seen. I wisely stayed away from the game for four years, until very recently.

I wasn’t planning on getting the game for a long time, but when some friends recommended it like crazy and offered to play the game with me, I couldn’t resist. I bought the game and waited for a rather long time to install. When it finally was installed, I was excited to see that such a large game of 80gb ran smoothly on my laptop. True, I had to turn down the graphics to make it run smooth, but so far, no crashes, no lagging, nothing. At first, the game took a long time to load and I was getting worried, but now it loads with no problems.

Now for the moment of truth. The game started, and of course, I chose Khajiit as my race (cats rule). I was confused with the map system but eventually got the hang of it and finished the starting quest, which got me into the game world. I had a friend to help me out pretty quickly, and soon, I was doing better than most new players. The place really was massive, but that was fine with me. Quests were fun to do and had a lot of variety. Wandering around, completing quests and adventuring with friends was enjoyable so far. And when I convinced another friend to play, it really became a blast. Wandering around the massive open world, nerding out over the lore of the game, fighting enemies together and delving into dungeons was some of the most fun I’ve had in game. Since four years had passed since the disastrous start of the game, things had changed.

Enemies drop various items and more gold often now, and although the prices of mounts haven’t changed, it’s much easier to get gold now. We were able to all get mounts within a couple of days (although it did take a lot of quests to get there). We had fun dungeon-delving, leveling up together, and travelling to different parts of the world with one another. Every single NPC in the game is beautifully and very talentedly voice-acted. It has made the experience definitely feel much more immersive. Characters interacting together, many with their own stories and personalities and the ability to make choices made the game that much better for me.
The questing was much better, as you had the option to finally help your friends with old quests that you had already completed. Unfortunately, the one thing I hate about the game, but is in no way the developers fault is the fact that when I’m trying to perform an assassination on an enemy, another player will randomly charge out of nowhere and ruin the perfect opportunity. It’s frustrating when I’m trying to level up a perk but end up having the moment ruined by some random player charging in like they stole something and the police are after them. It’s really not the developer’s fault there, but still, it’s a rather annoying aspect of the game.

All in all, I’ve been having fun these past weeks, wandering across the massive open world with friends by my side and fighting enemies together without a care in the world. Overall, the game has changed from its original broken state to that of something any Elder Scrolls fan can enjoy. And with the developers always updating and coming up with brilliant new locations and quests, the game feels never ending.