Apparating into my dreams 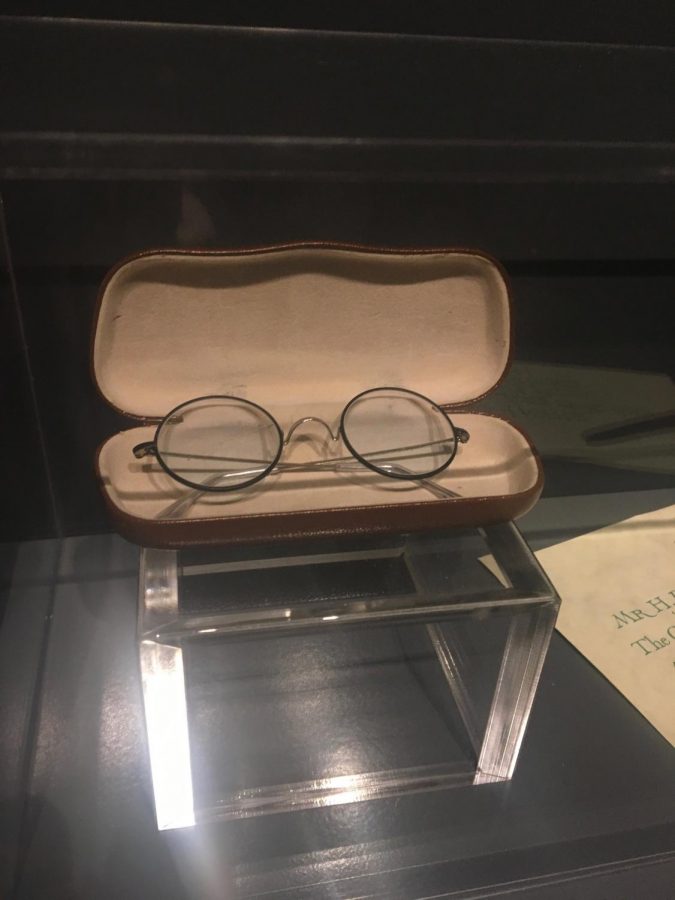 This picture of Harry's glasses was taken in London, England at the Warner Brothers Studio

Many children have fantasized of soaring over the city on a broomstick or fixing their problems with the wave of a wand. I was one of those children who would’ve loved to be part of the wizarding world, and part of me would rather still be going to Hogwarts.

My obsession began in third grade when I saw Snigda Narisetty reading a massive book. “Why on earth are you reading a book that big?” I asked.  “The AR points, duh,” she responded with a roll of her eyes.  That moment was the start of my journey into the wizarding world of Harry Potter. Since then, I’ve read the books and watched the movies countless times and even travelled the world to bring J.K. Rowling’s tales to life.

The first place that I travelled to because of these magical stories was Universal Studios in Orlando, Florida. My ten-year-old self was awestruck at how Diagon Alley and Hogwarts were so perfectly recreated; the street was indistinguishable from the movie and the castle looked stunning. It felt like I was stepping into Harry’s shoes and experiencing how he felt when he first travelled into the wizarding world. I could almost imagine myself as a Hogwarts student when I walked between the massive winged boars and entered the castle.

The second stop on my journey was across the country to Universal Studios Hollywood in Universal City. There too, they had the iconic castle recreated along with the snowy town of Hogsmeade. I loved walking among my fellow wizards and peering into the colorful shopfronts, only to be startled when a quill or measuring tape started to move on its own. The scents of chocolate frogs and fizzing whizzbees wafted through the street from Honeydukes, and the storefront lured in hungry wizards with it’s brilliant colors.

My third part of my wizarding expedition took me across the pond to London, England. London is home to the Warner Brothers Studio, which was where the Harry Potter films were born. Going through the tour I could see all of the talent and imagination that brought J.K. Rowling’s wizarding world to the big screen. There were thousands of props that filled the room; it almost looked like the Room of Requirement had opened its doors and flooded the studio with memorabilia and treasures. Many of the sets were also on display, such as Dumbledore’s office. You could step inside and imagine you were waiting for the Headmaster to step down the stairs with his eyes twinkling over his half-moon spectacles. I also wandered down the iconic stone floor of the Great Hall, where the tables were set almost as if they were waiting for the students to walk through the massive wooden doors and fill the room with laughter and spells.

My around the world travels came to an end at the origin of the series that captured the hearts of millions: Edinburgh, Scotland, where J.K Rowling sat in the Elephant House Café and typed on her antique typewriter a story that would become the best selling book series in history. Walking into the café, you could almost sense the magic and mystery in the air. I was simply spellbound. Looking around the city, it was clear to see what inspired J.K Rowling to write these incredible books. The city of Edinburgh surrounds a stunning medieval castle that looks very similar to how the Hogwarts castle was depicted. Greyfriars Kirkyard is a famous graveyard that is home to a couple of familiar names from the novels. Here, McGonagall and Tom Riddle can be found at rest, and I was so surprised that Rowling had gotten her inspiration for their names from a couple of hidden graves.

What started as a simple love of a book series turned into an around the world adventure over many years. I have loved every minute of travelling and I’m excited to continue my journey in the future. I still have many unanswered questions about the franchise and I can’t wait to explore more places.