No longer living in fear: freedom through Taekwondo 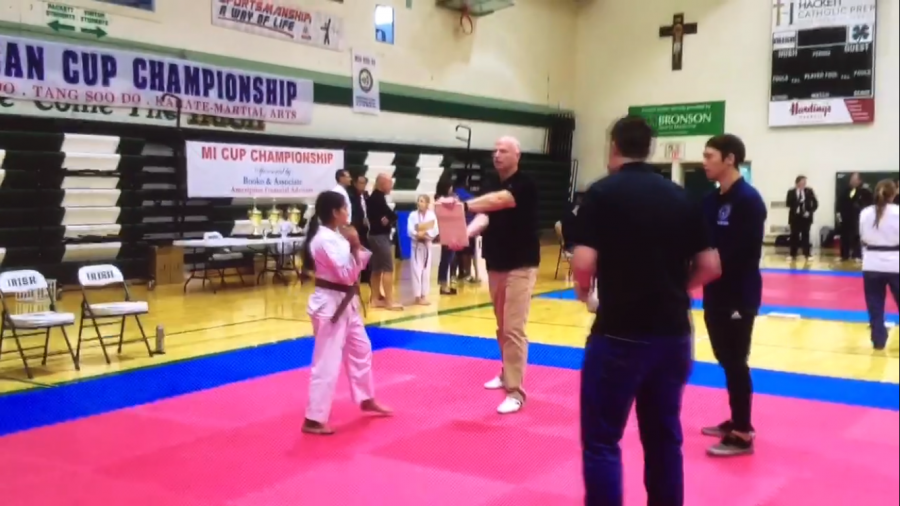 The shimmer of the sun on the surface drew me in, and before I knew it, I was out on the frozen lake. Seconds felt like minutes. I walked step by step, doing everything exactly how I thought I was supposed to. I wanted to walk on it and I was focused, but as soon as I realized that it could break, I lost confidence and I fell. This event would become a metaphor for my life, and I realized that I didn’t want it to be that way.  I wanted to be sure of everything I wanted in the future. Living in fear, as they say is something that feels safe at the moment, but is also the most dangerous thing you can do.

I grew up with severe anxiety, and at one point it was so bad I was too scared to get up in the morning to go out because I dreaded all of the bad things that could hypothetically happen to me. I did not talk to anyone unless they talked to me, and I grew distant from my friends. I felt isolated and alone in a situation that I created for myself:  locked in my own personal bubble, constantly being separated from everyone. The worst part was that I couldn’t help it; this was part of who I was living with anxiety.

When I was a little over eleven, one of my friends somehow convinced me to join her in Taekwondo.  For weeks, I watched in silence at the dojo across from my neighborhood. I stared in awe at the impressive use of bo staffs and nunchucks. At first, Taekwondo was new and difficult, but I grew used to it and ended up feeling not anxious, but powerful whenever I went. At the front of the dojo, in big letters, there was a sign that read: “House of Discipline.”  True to this phrase, Taekwondo is a lot about disciplining yourself, and is dependent on three thing: mind, body, and spirit. I was used to discipline because of competitive swimming, but this was the first time I was exposed to the concept in such a spiritual environment. From memorizing oaths, pledges, and forms to learning sparring or board breaking techniques, I did not only become stronger, but I developed as a person in general, learning to overcome my lifestyle of fear one class at a time.

I learned one very important thing over the years, and that is that fear is only something that you create inside of your mind. As you learn to confront your fears, they go away faster than you know it. Unfortunately, anxiety isn’t just something that you can flip a switch on and it goes away. I still live with anxiety, and some days are still bad. They’re getting better, though, and I know that Taekwondo has played a large role in that. I have even dropped out of dance and swimming to focus more on education and Taekwondo. This increased my abilities in many ways, even allowing me to join a demonstration team. My hard work paid off several months ago when I received my red belt, and every time I receive a new belt, I feel like I just reached another huge goal of mine, which is an amazing feeling.