The day I not only climbed a mountain, but did so with a suicidal baby 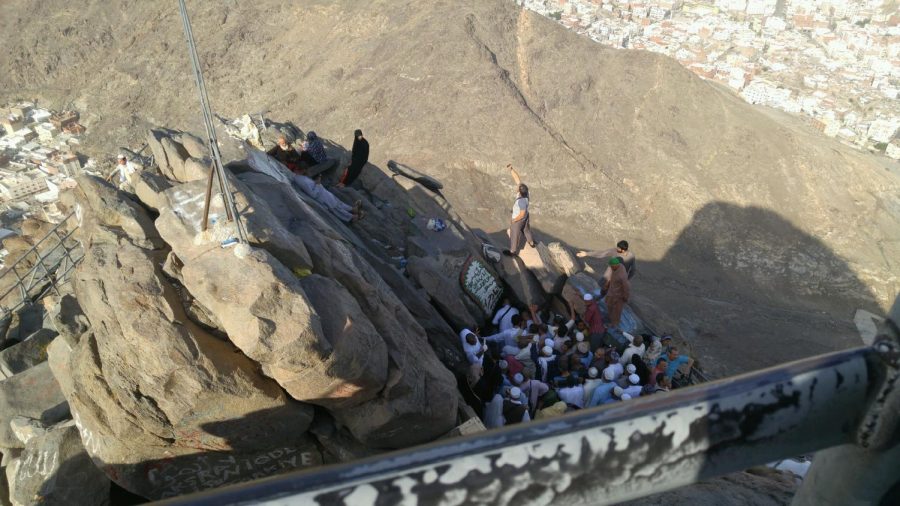 This photo shows one of the lower drops that my brother tried unsuccessfully to make.

“Let go!” screamed my baby brother over and over again as I gripped him tightly from trying to fling himself off of an enormous mountain. It was day 4 of my family’s trip to Saudi Arabia, and it was my parent’s “wonderful” idea to go climb Mt. Uhud, a mountain that has religious significance. Immediately at the thought of climbing a 3,533-meter mountain, two of my cousins retreated into the safety of air conditioning and room service. It seemed the rest of us were prepared to embark on this journey.

Then it was decided we would drive two hours to the mountain in the unbearable Middle Eastern heat that I’d grown to “love.” From getting lost in the Saudi Arabian markets to struggling to find any legal form of parking, getting to the mountain was harder than expected.  You’d think finding a 3,533-meter mountain would be easier.

When we finally found the mountain, we had to walk uphill until we got up to the actual steps of the mountain. Well, here we are, I thought. The start of our adventure, as I was about to join my family and take the first step, I was interrupted by my brother, who was so tired from walking uphill he asked me to carry him. Being the caring brother I am, I told my dad he was tired, who responded with the plan of taking turns to carry him. I grudgingly took him on my shoulders and we started upon the archaic path up Mt. Uhud.

The first hour went without a hitch. The stone steps were well maintained and there were railings for safety. As we got farther and farther up the mountain, the quality of the steps quickly began to decline and the railings began to disappear. It was clear that my brother’s goodwill and cooperativeness also began to dissipate. When he is tired and annoyed, my brother has a habit of becoming incredibly fussy and doing things for the sole purpose of bothering people. He was full on in this mode when it became my turn to be his pack mule again.

While we were near a steep edge, he suddenly lunged out and reached for the abyss. I pulled him back immediately, but apparently the idea of flinging himself off the cliff seemed like an amazing opportunity he didn’t want to miss out on. As if the trip wasn’t hard enough already without carrying a suicidal toddler with us, for the next two hours, he continued to attempt to throw himself off the side of the mountain.

I didn’t know about the other members of my family, but each time I passed him on to someone else, I felt a little more willing to let him throw himself off of the cliff. Throughout the difficult journey, my feelings appeared to spread as one by one each family member started complaining about my brother being absolutely mental. We all encouraged each other to continue on and took breaks at the designated “huts.” When we got to the top, I was carrying him, and thankfully he was extremely tired after fighting and yelling and was too drained to attempt one last escape at the highest point.  As we stepped up to the summit, we all admired the breathtaking view and headed into the caves to explore and pray.

This trip, even though it sounded like an awful time, did bring my family and I closer together and makes me want to go on other adventures with them…but only if my brother can walk independently, and only if I wasn’t given the option of air conditioning and room service first.