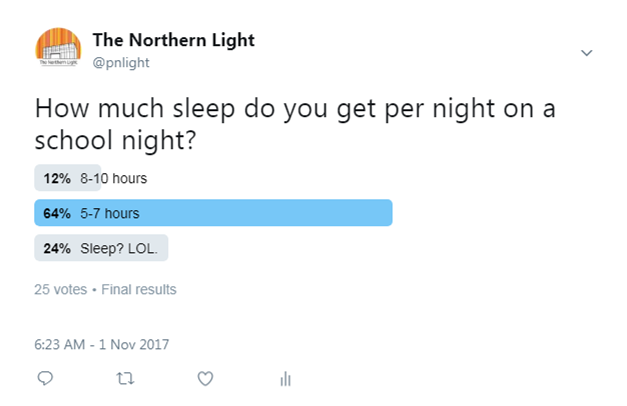 This NL Twitter poll shows that students are not getting nearly enough sleep.

Education is vital to success, but what is our education costing us? Besides our parents’ tax dollars and our tiime and social life, one of the biggest things we sacrifice is our sleep.

Although there have been countless pieces of scientific evidence concluding that school starts too early, many schools still begin as early as 7:30. According to the AASM (American Academy of Sleep Medication), school should start no later than 8:30. On top of this, the AASM also recommends that teenagers get 8-10 hours of sleep a night, though 70% of high schoolers report getting only 7 or less hours of sleep on a regular basis. In a recent Twitter poll, PN students revealed that 64% of responding teens got between 5-7 hours of sleep per night, supporting the national statistics.

Well why don’t teenagers just go to bed earlier, you ask? As nice as it would be to curl up in bed at 9:30, turn out the lights, and  close your eyes, for many students, this isn’t an option. The majority of PN students are involved with clubs, sports, part time jobs, IB classes and more.

Picture this: you arrive home from school at 3 o’clock, and you’re tired, but before you go to bed you have to study for your statistics test, write that paper for IB English, read that article for IB psych, and get a minimum of 8 hours of sleep. This could be doable, barely, but doable, oh but there’s one more thing…you work 5:30 to 10:30. This situation is not hypothetical, this is an example that  I have taken from my own life.

Now let’s imagine another scenario, you get home from school, again at 3, no work today, no practice, your teachers went easy on you and you only have two hours of homework. You’re determined to get at least 8 hours of sleep tonight. This should be a piece of cake, right? Unfortunately, this is not always the case, as reported by Time Magazine. When teens approach and go through puberty, the sleep inducing hormone called melatonin is delayed, making it hard to become tired before 11 pm. If you get to bed at 11pm, to get a sufficient amount of sleep, you would have to sleep till at least 7:30, but with school starting at 7:45, this is not an opinion.

This trend of sleep deprivation among teenagers can have some serious side effects.  Outside of academic performance, chronic sleep loss has been commonly associated with irritability, increased risk of depression symptoms, obesity, risk taking behavior, increased risk of athletic injuries, decreased attention while operating motor vehicles, and cardiovascular problems just to name a few. According to the American Academy of Pediatrics and the Center for Disease Control and Prevention, starting school later would improve focus, alertness behind the wheel, academic performance, and attendance.

Given the importance of education, why not invoke a policy that would benefit students focus, quality of education and attendance?