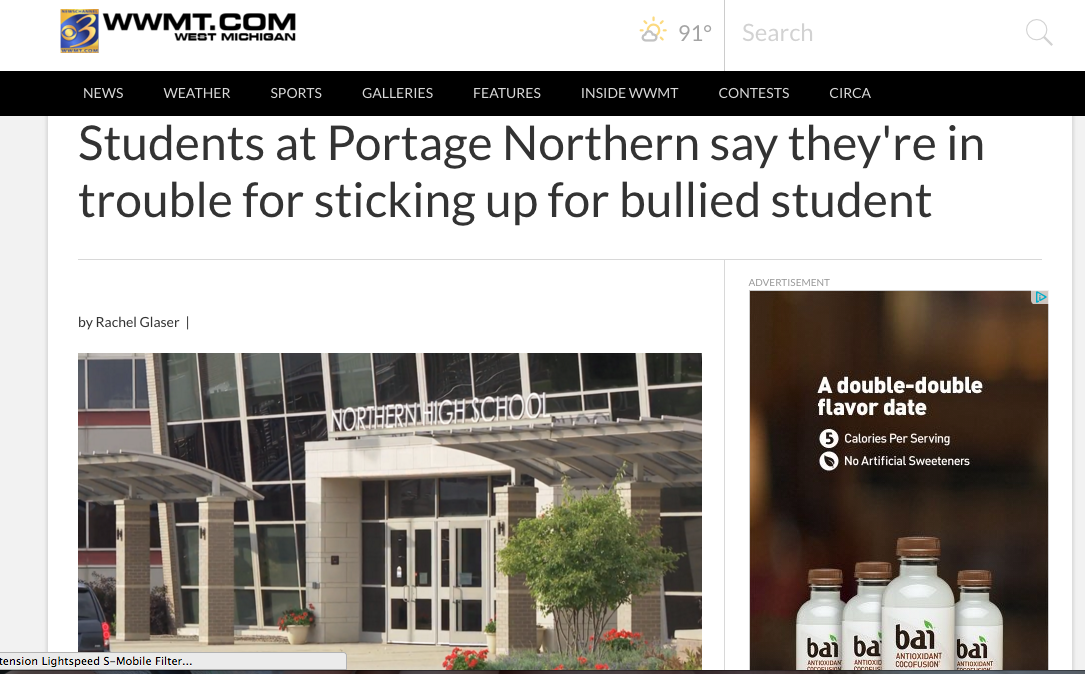 Portage Northern High School is a place where every year, a diverse group of students are nominated by their peers to be on homecoming court. It is also a place where just three days ago, one of those students, a senior with special educational needs, was voted senior homecoming king by his classmates. It is not a place where students, teachers, and administration turn a blind eye to bullying, as alleged by WWMT News.

As a trusted local news source, WWMT crossed a boundary with their news coverage this past week. The articles about the supposed bullying of a special education student reflected a lack of research and reporting, giving insufficient and incomplete information to the readers and lacking journalistic substance. No concrete evidence was employed to support any of the accusations, especially those most severe: that the school was trying to ignore a serious bullying issue and silence the students who were seeking justice. While district representatives offered honest and professional insights, News 3 seemed to intentionally interview and quote certain people more than the district. The end result is a story that is far from the fair and balanced news writing that even high school journalists like ourselves aspire to.

To put it bluntly, the writing in these articles, which is intended to uncover what could have been a serious issue had any hard evidence ever come to light, is pedestrian at best. “Maybe” this and “probably” that are neither indicative of professional journalism nor something one would expect from a news outlet as trusted as WWMT. Not only that, but our staff found that the headlines were misleading and did not match the actual content of the articles. “Students at Portage Northern say they’re in trouble for sticking up for bullied student” is one of these headlines, whereas the actual article only addresses the instance of one student receiving a potential disciplinary consequence. This punishment was actually issued for violating the Student Code of Conduct, not simply “sticking up for the student being bullied” as implied. While that fact is mentioned in passing in the story, the author still chose to pursue a different, much more accusatory angle that was directly contradicted by the facts in the situation.

By leading with headlines that seethed bias and only reporting one side of the story, WWMT portrayed Portage Northern unfairly and inaccurately, mostly due to how casually these highly-sensitive articles were written. The heavily-biased articles regarding this case provided limited, skewed information that shed only negative light on the school, failing to report the sheer joy that was shared at Friday night’s football game when a beloved senior classmate with special needs was crowned homecoming king and instead skipping straight to the coverage of the motorcycle escort at the school on Monday morning. Was it a simple oversight or due to the fact that it didn’t fit into the narrative that was already establishing PN as a place where that kind of thing “wouldn’t” happen?

Many details that were important to understanding the entire situation were simply disregarded or omitted by reporters. WWMT should have taken a more professional stance towards this sensitive subject of bullying, and in doing so considered all of the factors and facets of the situation. Earlier today, for example, they simply interviewed the bikers that escorted Julian Martinez to school. The reporter did not talk to students coming in or the parents dropping their children off amid what became an increasingly chaotic scene.  They also did not discuss how the police had to come to provide oversight on an event that was confusing and even frightening to parents and students.  Throughout the day, students discussed feeling scared and uncertain coming into school this morning, and eyewitnesses described parents who saw the chaos and simply drove away without dropping their kids off. None of this, which details the negative effects that the motorcycle escort had on the school environment, was included in WWMT’s report.

The coverage, while perhaps well-intentioned, has sensationalized the issue with minimal merit and credibility. Even in our student publication, our journalistic standards suggest that news stories should have at least three sources. These articles did not do that, nor did they indicate a non-biased, fair, and balanced approach by thoroughly interviewing individuals on both sides of the story.

As stated by the district, Portage Northern has taken the accusations seriously and has thoroughly investigated the situation. Due to student privacy laws, the district could not legally release the kind of information that could potentially have vindicated the school of the supposed wrongdoing, but it was noted in one of the WWMT articles that after extensive research, administrators were unable to determine who broke the phone. This information, mentioned in passing though an integral part of the narrative, was lost in WWMT’s coverage.

As a news staff and as a school, we are disappointed in the poor journalism and lack of ethics and integrity displayed by our trusted local news source in reporting on this situation. While it has strengthened our resolve to know that even as a high schoolers, we are capable of separating true journalistic practice from fake news well enough to discredit the quality of the articles that have put our school under attack, we still grieve with the students who are dealing with the fallout of our school being portrayed so recklessly, inaccurately, and unfairly.

We want to be clear: we stand firmly against bullying. If there was a situation where students, teachers, and administrators were genuinely ignoring the mistreatment of a special needs student, or any student for that matter, we would be on the forefront of holding those responsible accountable to create an environment that is better for everyone.

We also, however,  stand against journalistic malpractice and news outlets who report only part of the story, manipulate the feelings and opinions of their viewers, and make situations worse instead of better. Our message to WWMT: West Michigan and the staff and students of Portage Northern deserve better.

-The Northern Light
UPDATE: Thank you for your comments and feedback. Unfortunately, comments containing swear words or other inappropriate content cannot be published on this student forum, but we have read and taken into account all comments. We are currently researching for an in-depth online feature article on bullying here at PN, which will delve into our bullying statistics, referral rates, and the legal process schools have to follow when it comes to handling alleged bullying situations. Stay tuned for this information.