Boys and girls golfers get into the swing of things 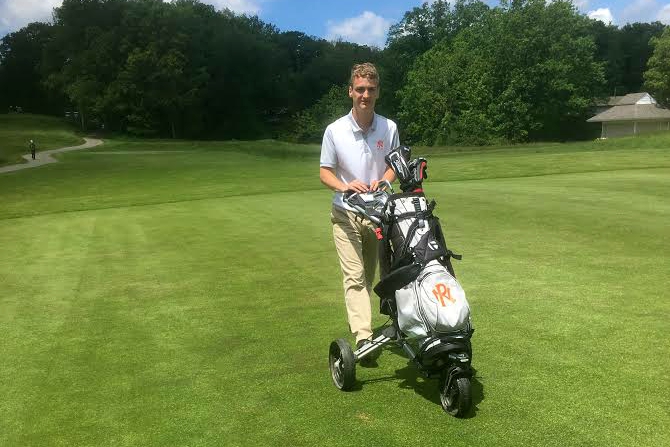 Portage Northern men’s golf is in full swing with both JV and Varsity golf teams competing at several events this past month. From a player’s perspective, the Huskies had less than the shining season they were hoping for. After speaking with several players, it becomes apparent that morale is at bit low for both the JV and Varsity squad. “Lets just say we finish last a lot,” says JV player Ethan Griwatsch (10). Fellow teammate Noah Burtovoy (10) said when it comes to who carries the load on the JV team, “It’s usually Ethan and Sam Betts carrying us.” The varsity season ended for all team members on May 31 at the regional meet, where Steven Garside(11) lead the team by shooting an 86. The next best score was an 88 posted by Matt Juzwiak (12), who was followed by Austin Rzepka with an 89. Bobby Schaefer and Reid Randall (12) also played, but did not have their best matches on this particular day.

Coach Edward Culp was proud of the effort that his players put forth this season. “Throughout the season, the Garside and Juzwiak battled for the number one spot and lead the team,” he said. “Bobby Schaefer ended up with the low average for the season, but he didn’t play in as many events as Steve and Matt.” The team finished in third in the division, which Culp considers a major accomplishment, especially since for more than half of the conference meets the team had one or more seniors missing due to IB testing. “Next year looks very bright,” he added. “We have 3 returning letter winners with a solid group of JV players next year and new freshman that could help instantly.”

Portage Northern women’s golf often goes unheralded due to larger sports at the school. Golf might not be a sport where much action takes place, but it’s more of a sport that takes concentration, technique, and lots of patience. The Huskies girls’ team knows that for a fact. With a summer start and first contests beginning August 16 and the finals on October 21-22, the team is preparing to match the success this year that they had last year. In 2016, the girls team took home 39 total medals, including each of the six players on the girls’ teams medaling at the Greater Kalamazoo tournament. Throughout the season, Erin Sexsmith (11) played stellarly, qualifying for the SMAC All-Division team and qualifying for states, finishing 22nd out of 108 golfers. Lindsay Hall (12) also stood out, making SMAC West Division and SMAC All-Division. Taylor Cooper (9) earned three medals, and was invited to two tournaments at Lakeview and Comstock. Coach Bob Eustice says the girls learned “how to be unselfish, how to be a great teammate, and learned how to eliminate big scores on holes.” Eustice loves many qualities about the girls he coaches, but the ones that stood out were, “their positive attitudes, they’re fun to be around, and they’re semi-competitive.” The next season begins at the end of July, but Sexsmith and Grace Beam (11) are playing in Kalamazoo Junior Golf Association tours beginning in June. Beam is playing golf after making the switch from being a soccer player and says making the switch was a difficult one. “It was awful. I didn’t have much of a choice, because I had gotten two bad concussions and my parents weren’t willing to risk a third.” Beam’s everyday routine is rigorous and busy since switching to golf. “My typical day was golf practice, soccer practice, homework, sleep. Now I have an offseason and free time which is super foreign to me because I’ve played soccer since I was 4.” She is excited for the season and ready to get back into the swing of things. “We’ve got some incoming freshmen that I’m super excited to welcome to the team.”

Eustice says one unique thing about his team was the scarcity of players on his team. “I only had six players and five of them were varsity players. Basically, I need more players!” As the golf season tees off in July, the girls, and Eustice, are ready for another great season, and while they’re looking for more players, if you like to hit the green in your spare time, this tight-knit team might be the place for you.