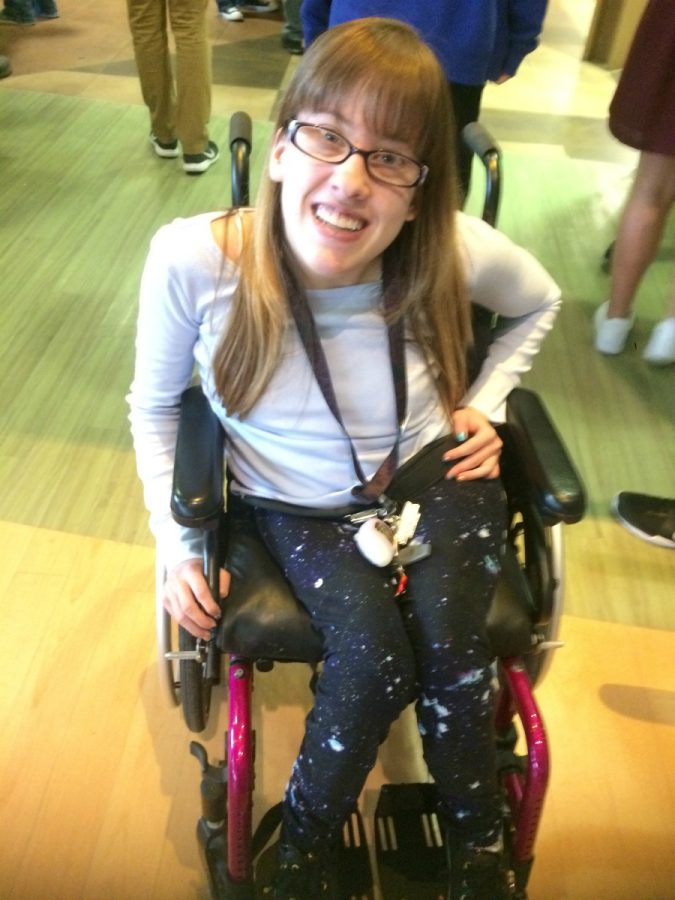 As a student wielding a wheelchair takes on the busy hallways during passing time, everything seems taller to her: the people, the clocks, the lockers. Sometimes it is not just her surroundings, but her condition that towers over her. This student is Hailey Markus (12), and as a person diagnosed with Spina Bifida (when a baby’s spinal cord fails to develop properly), she has faced harassment and depression. Instead of feeling defeated, she chooses not let her condition define and overshadow who she is as a person.

Spina bifida occurs in approximately 7 of out every 10,000 live births in the United States. According to the Spina Bifida Association of America, it is estimated that more than 70,000 people in the United States are living with this birth defect.  “I can’t feel anything from the waist down so doing stuff myself can be a challenge,” Hailey said when reflecting on her condition. On the topic of her challenges, she continued, “getting to class on time and getting to lunch on time is definitely a challenge.”  Although she faces obstacles at school, she’s found ways to overcome it by leaving class earlier – a simpler solution to one of her problems.  At her home, she still faces challenges, although they may be different from the ones she encounters at school. She explained, “getting dressed by myself and the personal needs and I can’t leave the house without help getting down the stairs,” she continues with a positive note, “but the other stuff I can do, like eating.” After describing a few of her challenges, she begins to lay out her daily routine. “I get up and my mom takes me to the bathroom and helps me with the shower and gets me dressed,” she elaborates, “She takes me to school and then after school I come home then she takes me to the bathroom again and puts me in my wheelchair. Then, I relax till my mom comes home from work then she gets me ready for bed.” Although this may seem like a complicated lifestyle, it is the norm for Hailey and her family. “Even though she’s been in a wheelchair her whole life, she’s never had a lot of pity for herself. There are ups and downs, but for the most part she’s always been upbeat and happy,” said her mother, Susan, who is especially proud of how resilient Hailey has been through all of her surgeries. “She has had 5 or 6 surgeries and handled all of them very well,” she said.

Rising to the Occasion:

Although she has adjusted to her lifestyle, there is still no solution to the way some students and people unfamiliar with her treat her in any social setting. Hailey believes that the belief that people should treat her as if she lives in a bubble has isolated her from her peers. “I feel as if I don’t have many friends because of this disability,” she shared. Her time as a student at North Middle School was when she felt like she faced the most harassment and prejudice. She recalled, “I got bullied a lot and teased. I felt like the friends I did have were only my friends ‘cause of the wheelchair. Honestly my condition has, at times, made me feel bad for myself and I have had depression in the past.” Thankfully, the chants and taunts from others went down significantly as she made the transition to high school and Hailey has learned how to blossom into her own person and find her niche at PNHS. When her Career Skills class was asked to describe her, students excitedly and without hesitation shouted out, “kind!” “good at everything!” and “smart!” Career Skills teacher Esther Burnside spoke glowingly about Hailey. “She is one of those seniors that is just ready to move on,” she said. “I am actually using her as an example for the class right now. We’re talking about how she’s going to have to advocate for herself and her needs when she’s in college, but she’s going to be great. She’s at that doorway to graduation and ready for her future and I am so proud of her.” Hailey’s teacher consultant Laurie Kuiper agreed. “Hailey is a successful senior with a bright future.  She has goals for her future and is determined to reach them.  She mentioned to me that she has been the only student in a wheelchair all four years here at NHS, but she doesn’t mind this fact, though at times it can be lonely,” she said. “Hailey’s sense of humor and smile are contagious and she is a wonderful young lady.”

Although she occasionally still feels down, her condition has not stopped her from having lofty aspirations. “She’s going to KVCC in the fall to study hospitality and business with the ultimate goal of working for Disney World,” shared her mom. Hailey elaborated: “I would like to work at Disney world and plan people’s trips. I’m a huge Disney fan– it’s always been a big part of me since I was little.”  One of Hailey’s lifetime goals is to make others happy, and she has  found something in aspiring to work at Disney that allows her do what she loves and help others at the same time.

More than anything, Hailey wants people to know that she is a normal student and refuses to let people throw her a pity party. Instead of feeling sympathetic, she yearns for her peers to give her the treatment every other student receives. She says, “I’d like to tell students that you don’t have to think of me any differently. I’m still a person with actual feelings and I’m like everyone else, I just can’t walk.”

There is no cure for spinal bifida, only treatments to make the condition more comfortable. That has not – and that will not – stop Hailey from striving to be a normal high schooler and to have a job that puts smiles on people’s faces. With the love from her mother and support from her close friends, she believes that she can achieve anything she sets her mind to. Randy Prince (12), one of those close friends and the base of her peer support system, sees the impact she has on others. He said, “ I think she can inspire many people to be happy no matter what can happen. She’s been through a lot more than that and she’s managed to keep herself happy, which is really impressive.” He continues, “usually people get incredibly insecure and just give up.”

Hailey has, time and again, refused to give up. She is a warrior, she is strong willed, and she uses her past experiences to overcome any obstacles in her way. She wants to prove to others that a wheelchair does not hinder her success and her ability to be normal.  She says, “Just ’cause I’m in a wheelchair doesn’t mean I’m any different,” but she is, and in the best way possible: she is singularly extraordinary and a perfect example of a role model for students everywhere.