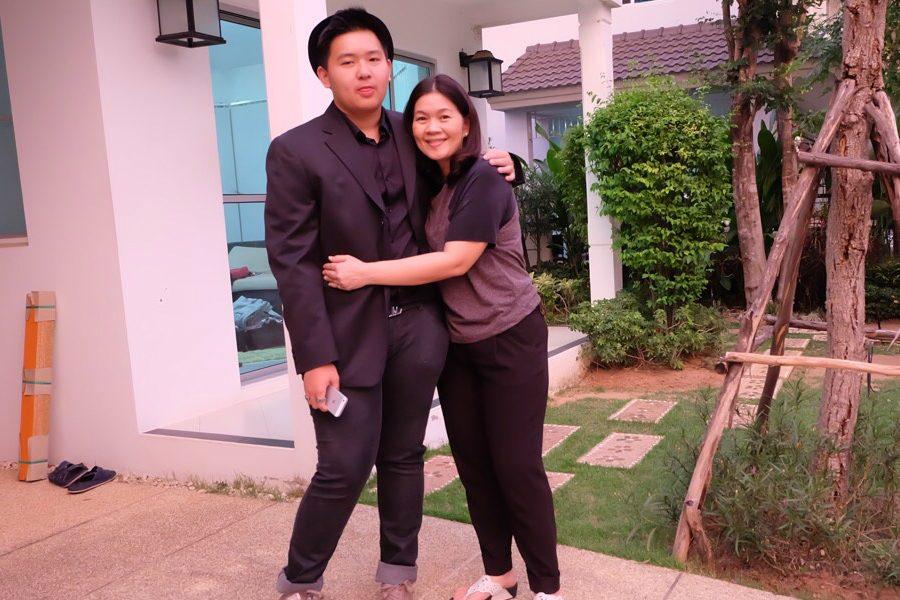 Without the mothers of the world, the continuation of human life on Earth would be non-existent. They bring bodies to this world after nine excruciating months of various forms of pain and sickness. Not only do they suffer every step of the way for this cause, they influence their children in indescribable ways from the minute their hearts begin to beat, long before entering the atmosphere. As an infant develops and begins its journey down the winding path of life, its mother’s habits and interests are recognized and implemented into the child’s own being. Indeed, a child’s genetic makeup and personality are half credited to its mother and half credited to its father, but in this case, sixteen year-old Tanapoom (Poom) Atiwetin has his mother to credit for his deep passion in the shoe and clothing industry.

Just four years ago, Atiwetin and his mother travelled nearly 280 miles southwest from their home in the Khon Kaen province of northeastern Thailand for a day of shopping in Thailand’s industrial center of Bangkok. For him, the trip to Bangkok wasn’t an unusual occurrence. According to Atiwetin, Bangkok is the place to go if you are really looking to peruse through some of the top fashion in all of Asia. Although Bangkok is a place that Atiwetin and his friends and family often visit to shop for new clothing and shoes, it became more than just the typical city center for him four years ago. As twelve year-old Atiwetin and his mother walked through the sneaker store doors, his eyes were drawn to a pair of gleaming Jordan shoes.

Prior to laying his eyes on what seemed to him to be the most beautiful pair of shoes he may ever acknowledge, Atiwetin had little interest in shoes and clothing in general. His mother, however, has grown up with an immense infatuation for the beauty and uniqueness of the industry. Atiwetin recalls pleading his mother to purchase the pair of Jordan’s that he so strongly admired that day in Bangkok. If he kept his grades up to par and earned a solid grade point average at the end of the school year, Atiwetin’s mother promised to purchase the shoes for him as a reward for working hard and staying focused on his studies. Sure enough, he worked diligently all school year while storing the image of the Jordan shoes in the corner of his mind. His mother purchased the shoes, as promised.

Upon receiving his first ever pair of top fashion shoes, Atiwetin never predicted that buying and selling shoes would soon become more than just a hobby, but a lifestyle that continually inspires him every day. With the support of his parents who own a furniture business in his hometown, Atiwetin began working there every so often to earn a little bit of money. From the amount of hours he has put into to his family’s business over the past few years, Atiwetin has now purchased 20-30 pairs of shoes with his own money. “I’m happy to buy something that I really love,” exclaims Atiwetin.

Due to the way his mother and father raised him, he fully understands that in this life, without putting forth 100% effort, you will not receive what it is you want. His advice to those who are younger than him who also share a passion for clothing and shoes is, “You have to study hard and work hard. Also, it is important to save your money.” These three understandings are essential to the process of reaching success, according to Atiwetin. Not only does he generate a certain income that gives him the ability to invest in shoes, but Atiwetin also puts his money away to purchase clothing. His favorite article of clothing is  a “street” brand t-shirt.

Transitioning from childhood to adolescence has been very rewarding for this sixteen year-old Thai fashionista. As he explains, “I am very proud of myself and my parents are proud too.” Through personal experience, Atiwetin believes that the process is just as important as the outcome. It feels good to work and study hard every day in order to continue pursuing what he is most enthralled with. Atiwetin’s Yeezy shoes are the one pair that top all of his charts. “They are so cool, they are my favorite shoes,” says Atiwetin after describing the only time he felt the outcome was more rewarding than the process.

In the future, Atiwetin plans to follow in his older sister’s footsteps and study world business at an English speaking college in Thailand. For the time being, he will continue buying and selling shoes through Grailed, an application found in the App Store through Apple. “I don’t know about the future, but I’m going to do my best,” says Atiwetin. Currently, Atiwetin is living in Portage and attending Portage Northern High School as an exchange student. His host-mother, Maggie Liebert, who has welcomed Atiwetin with open arms, alongside her husband Rainer, into their home, says, “He has a great sense of humor and is very laughable.” It has been a pleasure for the Liebert family to host Poom and they are looking forward to learning even more about the Thai culture and getting to know Poom and his love for the shoe and clothing industry.