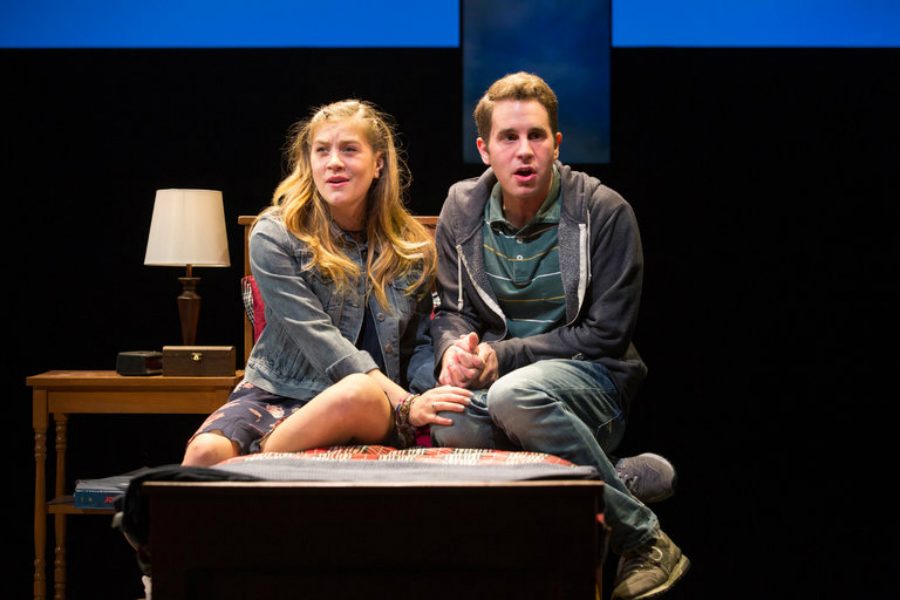 On December 4, 2016, Dear Evan Hansen, a new musical, opened just outside of Times Square New York. Fans heard the solo “Waving Through the Window,” in early November and instantly fell in love. Followers of the musical anxiously anticipated  the release of the rest of full album which dropped on February 3, 2017. Fans preordered the album as soon as it was available. Ben Platt, most notably known for his role as Benji in Pitch Perfect, stars as the title role in the musical. Benj Pasek and Justin Paul, Pasek and Paul if you will, wrote the songs as a joint effort for the musical. In an interview with the New York Times, the pair explained that they wanted to write songs based on the storyline and plot. The story follows high school teen, Evan Hansen, as he becomes mixed up in the story of a classmate’s suicide. Dear Evan Hansen has 100% lived up to the hype.

The very first song “Anybody Have a Map,” is a classic musical theater song: upbeat, attention grabbing and a perfect preface to the rest of the track. The next song is the infamous fan favorite “Waving Through a Window,” which has absolutely nothing but perfection threaded through each lyric and each key change. Evan Hansen beautifully reflects in the song, If I Could Tell Her, “Though he wanted to. He couldn’t talk to you.” And trust me, if you have ever had a crush, ever, you completely relate to this sentiment.  Fun fact: Portage Northern Alumni, Nat Zegree, was the very first person to sing “Waving Through a Window,” as well as the rest of the songs while Dear Evan Hansen was still working its kinks out. That’s right, Zegree was technically the first Evan Hansen, pre-Ben Platt. Though Zegree is not legally allowed to release much information about his time with Pasek and Paul, he was referred by a friend to help them test out their songs with a young voice due to his undeniable talent and extreme knowledge of instrumentals.

From start to finish, the music is absolutely beautiful and the key aspect for its success thus far is the fact that it so strongly resonates with the teenage population. The majority of songs deal with Platt’s character his struggle to fit in. Whether you are surrounded by a strong friend group, or a wallflower watching from the outside, the music and lyrics are so easily relatable to anyone that has ever attended a high school.  In the words, “When you don’t feel strong enough to stand, you can reach, reach out your hand,” in You Will Be Found, every listener instantly feels comfort in the realization they are not as alone as they feel.

Though Dear Evan Hansen’s weaknesses are few and far between, a glaring difficulty of the album is the listener’s inability to fully comprehend the music without full knowledge of the musical. A prime example lies in the most popular song, “Waving Through a Window.” To the naked ear, one may picture Evan Hansen physically inside his house, staring through a window to the outside world, but in actuality the “window,” is a cell phone. The lyrics are so much stronger when the listener knows this. The lyrics “I’m tap tap tapping on the glass,” are referring to a cell phone in the social media era, not a physical window. It is sensible to assume that it was Pasek and Paul’s intention for the Window to be a symbol of multiple meanings, but the listeners that are unable to see the musical in person yet still enjoy the songs, can not quite fully understand that meaning.

Overall, Dear Evan Hansen is, as the website states, “A gorgeous new musical for anyone with a beating heart.” The album even made Broadway history by hitting number eight on the charts, which is the highest a musical has been since 1961 according to Playbill. Take that, Hamilton! It is evident that the Dear Evan Hansen soundtrack rings with theatre nerds and non-theatre people alike. The music is incredibly universal and will no doubt stand the test of time.

If you want to listen to the song that has captured everyone’s hearts, click the link below and let us know what you think in the comments!