PNHS Rugby: a team for everyone 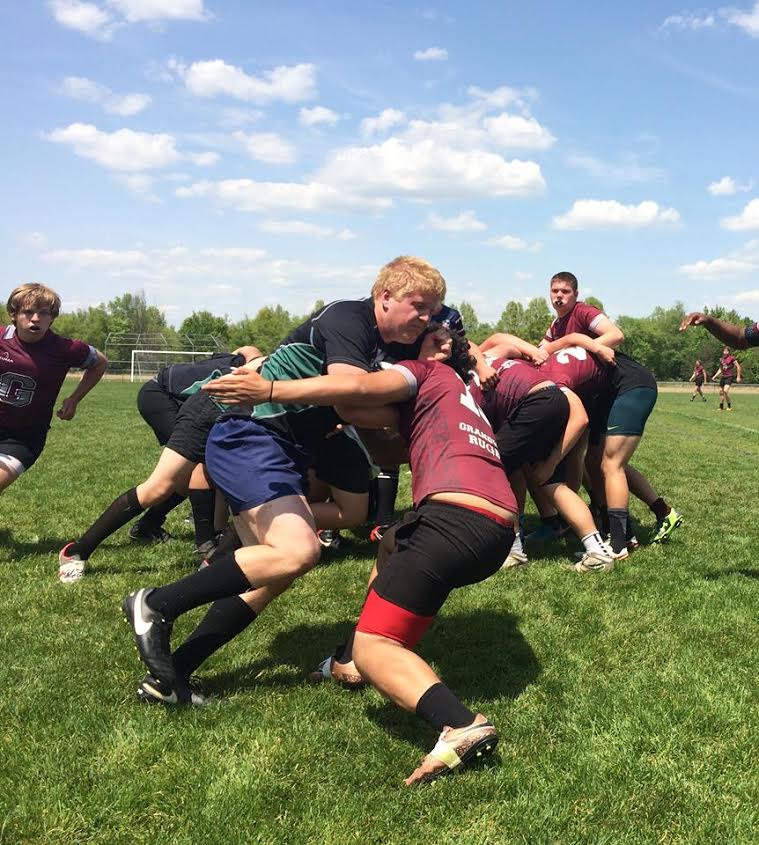 A sport with no pads but still hard hitting like football, the sport of rugby is a game based on technique and respect for the opponent. Because it’s not widely popular in the United States, rugby flies under the radar as a sport, but it should not be ignored that it is just as competitive and difficult to play as football and, for PN students, perhaps even easier to be successful.

Think of rugby as an evolution from soccer, and think of American football as an evolution from rugby. There are aspects of both sports in rugby, especially in the sense that it is continuous play, like soccer, whereas football allows the teams to set up their offenses and defenses. Rugby is like football, however, because the goal is to score a ‘try’ (like a touchdown) and the defense will attempt to tackle the ball carrier. One interesting aspect of rugby is that no forward passes are allowed. The ball may only be advanced by running or kicking it. Not many students at Portage Northern know that there is a rugby team, but it is like the water polo team, having Portage Northern and Portage Central students both participate.

Rugby is the type of sport that that many students can be successful at regardless of their size or previous athletic experience. Take Dominique Maestas (11), who isn’t the biggest kid or hasn’t been playing for very long, but he’s found a niche in rugby. “The coaching is helpful. Also, it’s less complicated because it’s like football, but it’s less complex.” Maestas is only 5’3”, but he says it doesn’t faze him whatsoever. “It’s not about the size of the dog in the fight, but the size of the fight in the dog.” Maestas is an example of what many can be if they just give rugby a try: successful as soon they step on the field. Coach Brian Varney says,  “Pretty much anyone of any size can just come in and play, they just get put into a position that’s appropriate for them.”

Team captain Brandon Kerr and coach Varney echoed the same sentiment regarding the camaraderie and civility of the sport. Kerr says, “You make new friends and those friends become more like family. In general, Rugby is just a more civilized sport. You still respect the other team and you eat dinner with them afterwards. There’s a huge idea of respect in rugby, and it’s just a great feeling.” Varney says, “Rugby is a game built upon respect and character. Even though during the game you’re on the field trying to tackle each other, trying to win, after the game, there’s a lot of camaraderie.” A sport built on class and respect is definitely one that deserves more recognition in the United States. In college, every university has a rugby team and most players are accepted, unlike the popular American sports like football and basketball, where only the best advance in the sport.

Evan Andrews, a Portage Northern alumni, currently plays rugby in college at Michigan Tech and  says the game takes another step in the transition from high school to college. “The speed of the game increased. Even though it is a club sport, the competition is still at a high level and some of the teams we play are made up of players who are trying to impress coaches in order to get on their teams D1 or A-side.” Andrews acknowledged the same points Kerr and Varney did about sportsmanship and respect. “People on my team have more friends on other teams and know more people. I believe that this helps to solidify the point that rugby is has more sportsmanship than other sports.” Playing rugby at Portage Northern made Andrews’ dream of being a college athlete a reality, and the upcoming season could make that dream come true for a whole new generation of Huskies, too.

Rugby may be a sport that not many people really acknowledge here in Portage, but it’s one that should command the attention and respect of those who love to play sports. A civilized, organized, respectful game that’s much more physically strenuous than football, rugby is for anyone to try, no matter what experience level or size someone is. For more information, contact Coach Varney at [email protected] and also visit them on Facebook.