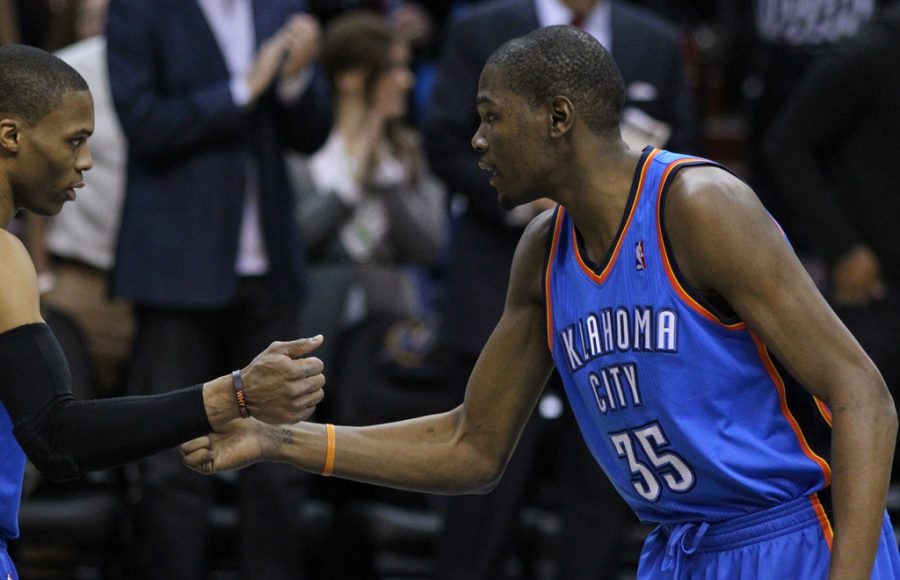 On Saturday, February 11, tensions were high in Chesapeake Arena as Kevin Durant returned to Oklahoma City for the first time since leaving the team in July to sign with the Golden State Warriors. The departure of Durant was a bitter one for Thunder fans, because the Thunder lost in the Western Conference Finals to those same Warriors, failing to reach the NBA Finals after holding a 3-1 lead in the series (It got better for Thunder fans, because the Warriors would go on to blow a 3-1 series lead in the Finals to the Cavaliers).

Kevin Durant took visits to different teams like the Clippers, Celtics, and Warriors among others including his incumbent Thunder before ultimately deciding to sign in Golden State with Stephen Curry, Klay Thompson, and Draymond Green. The Warriors were 73-9 in the season previous to signing Durant, who is one of the best scorers in NBA history, averaging 27.3 points per game for his career, shooting 48% from the field and 38% from 3 point distance.

Durant made his decision to sign with the Warriors in an article he wrote for The Players’ Tribune titled, ‘My Next Chapter”, featuring a gray photo of Durant on the cover with his arms crossed standing on a bridge surrounded by trees wearing a white shirt. Throughout the sports year, when a team would in a big game, in any sport, fans would photoshop that team’s logo onto Durant’s shirt.

Many fans saw Durant’s move to Golden State as weak, or soft. They were not impressed with Durant abandoning his team to run off to a seemingly easy championship run with the Warriors. It didn’t sit right with fans that he left the team and city he loved for nine years and strived to deliver a championship to go to a team that gives him an easy chance to win a ring, similar to what LeBron James did in 2010, leaving the Cavaliers to team up with Dwyane Wade and Chris Bosh in Miami. James ultimately won two titles with the Heat, before returning to the Cavaliers in 2014.

Although many Thunder fans were left shocked, betrayed, in tears and broken to a point where they burned their Kevin Durant jerseys, no one was left higher nor drier than Durant’s former teammate Russell Westbrook. Westbrook has outwardly expressed his displeasure with Durant in various ways, including wearing a photographer’s vest, taking a jab at Durant because he loves photography as a hobby. Westbrook also released an Air Jordan commercial before the season, dancing to Lil Uzi Vert’s ‘Do What I Want’, sending the message that now that Durant is gone, he does what he wants because the team is all his.

The game started with Durant hitting a jumper as soon as he got the ball. He started off shooting every time he had the basketball. Russell Westbrook opened the game up passing the ball and finding teammates and creating the best offense for his team. At halftime, the Warriors were all over the Thunder, 73-50. When play resumed, It didn’t get much better for OKC. The Warriors nearly held 30 point leads, mostly hovering around 25, give or take.

When the game was all but over, Draymond Green swung a pass to Kevin Durant, who casually sized up Westbrook, launched a 28 foot three ball, and promptly drilled the shot nothing but net, making the score 123-104, putting the game out of reach. The moment Durant wanted all along. A crowd silencer for sure, but most of all, a message. A message that Durant is a Warrior now, and he’s out for revenge on everyone that turned their back on him upon his decision to leave.

Durant may have left Oklahoma City, and ‘Angry Brodie’ Russell Westbrook is just that, and Angry Brodie, but Durant is well on his way to winning his first championship, and Westbrook will be fighting for a playoff spot for a few years. Given, the Warriors are a much better team than the Thunder, but Durant is a much more efficient player. Durant’s +/- on the year is 11.2 to Westbrooks, 2.5, and Durant shoots at 50% in the fourth quarter opposed to Westbrook’s 44%.

While Durant’s return to Oklahoma City was bittersweet, and more bitter than sweet at that, he scored 34 and got the win, being the more efficient player than Westbrook, and that about sums up both of their careers.