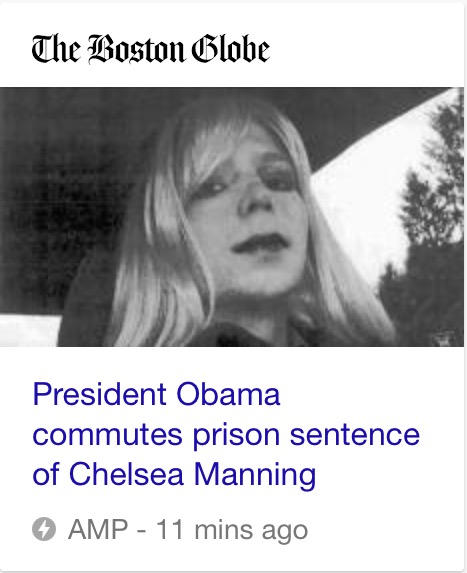 **UPDATE** JUST BEFORE 6:00 PM ON TUESDAY, JANUARY 17, PRESIDENT OBAMA COMMUTED THE SENTENCE OF CHELSEA MANNING. SHE WILL NOW BE RELEASED IN MARCH 2017. THERE IS NO WORD YET AS TO WHETHER OR NOT JULIAN ASSANGE WILL EXTRADITE HIMSELF TO THE UNITED STATES AS PROMISED.

What are you willing to do for your country? This is the question that two people had to ask themselves as they prepared to break the law and risk imprisonment and even death. The two people are Edward Snowden and Chelsea Manning. Both large figures in the public sphere, whether you love them or hate them, we all have to admit that they have released information that we the American people should know. However, as President Obama nears the end of presidency, he is faced with the question of whether he should pardon these people and what will happen to them if he doesn’t.

Edward Snowden has been on the run from the government since he became a whistleblower in 2013. He had been working for Booz Allen, a subcontractor for the NSA, when he found out that the NSA was illegally surveilling millions of Americans each year. He began to make copies of the evidence he needed to expose them and eventually made his way to Hong Kong, where he contacted web news outlet The Guardian and filmmaker Laura  Poitras. After blowing the whistle, he travelled to Russia enroute to South America, where he wanted to seek asylum. The US cancelled his passport, however, trapping him in Russia where he still remains. His story was recently immortalized on the big screen in Snowden, with Joseph Gordon-Levitt playing him. The real Snowden even collaborated on the movie to ensure as much accuracy as possible.

Many have said that what Snowden did was wrong and endangered lives because the means that the NSA used to spy on American citizens are also the ways that they spied on terrorist and other dangerous leaders worldwide. However, that is not completely true. When asked about what he did, Snowden said, “I carefully evaluated every single document I disclosed to ensure that each was legitimately in the public interest. Harming people isn’t my goal. Transparency is.” This is reinforced by the fact that Snowden went through journalists, allowing the information to be vetted before it was exposed. Much of the information that was released dealt with how the NSA was overstepping their bounds and not in the interest of national security. It was revealed that the routinely searched phone calls, text messages, and personal emails and messages online looking for “suspicious” material, and when they found something, they surveilled not only that person, but all of their contacts, and their contact’s contact’s, and their contact’s contacts, resulting in about 2.4 million instances of surveillance of regular people for every one flagged person.

There was also proof that the NSA was spying on friendly governments, which led to problems with the chancellor of Germany and the President of Brazil. Since blowing the whistle, there have been many regulations that have been passed in an attempt to control the NSA and many of the surveillance issues Snowden reported have since been deemed illegal. None of this would have happened had Snowden not done what he did.

Then there is Chelsea Manning. A transgender woman originally known as Bradley, Manning was working with an intelligence unit in Iraq when she divulged 700,000 documents – among them confidential diplomatic and military communications revealing the names of intelligence assets – to WikiLeaks. At the time, it was the largest theft of classified information in US history. She was charged with breaking the Espionage Act and has been sentenced to 35 years in prison, but is up for review and parole in 2019. When asked why she chose to leak the material, she told Amnesty International: “These documents were important because they relate to two connected counter-insurgency conflicts in real-time from the ground. Humanity has never had this complete and detailed a record of what modern warfare actually looks like. Once you realize that the co-ordinates represent a real place where people live that the dates happened in our recent history; that the numbers are actually human lives—with all the love, hope, dreams, hatred, fear, and nightmares that come with them—then it’s difficult to ever forget how important these documents are.”

Manning’s case is different than Snowden’s due to the fact that she released information through Wikileaks instead of a secure source, due to reports that while deployed, Manning was showing violent and unstable tendencies (which may or may not have been the result of post traumatic stress disorder or her ongoing struggle with gender dysphoria), and the fact that her release of information harmed US-foreign relations and also put the lives of undercover operatives at risk by exposing them. However, she still did a great service through divulging the information by calling attention to various questionable things that the army was doing in Iraq, including shooting unarmed civilians.

The biggest red flags surrounding Chelsea Manning have to do with her treatment while in prison. As a transgender woman, Manning has faced many challenges and mistreatment (including solitary confinement, bullying, and harassment) while being required to stay in a men’s-only prison. She has even attempted suicide twice and had to go on a hunger strike in order to get the Army to agree to support her gender realignment even after she had been diagnosed with gender dysphoria. Her treatment while in prison has been so bad that WikiLeaks founder and fellow whistleblower Julian Assange has verbally agreed to be extradited to the US to face his charges if the government agrees to pardon Manning. Her case has  has started an important conversation about how ill-prepared our government is to deal with LGBTQ prisoners.
We are a country by the people for the people, and part of that is holding our government accountable for their actions. Whistleblowers like Snowden and Manning do us a great service in that they make our government’s actions transparent and are  willing to risk everything to do it. We should honor their sacrifice because once we start punishing those keeping the government accountable, people will stop holding them accountable, and that is what we should really be afraid of. Furthermore, as we look at a new presidency, we see Trump may not be so accepting. Despite the fact that the programs Edward Snowden revealed have since been declared illegal and he has said that he would return to the US to face a just trial, President-Elect Trump has called him a “traitor” and has called for him to receive the death penalty. The PEOTUS’ track record of support for LGBTQ rights is also questionable, making Manning’s future, in prison or out, just as bleak. As Obama’s presidency comes to an end, we all need to make our voices heard in asking him to pardon these two people, who have done a service for the people of their country largely only at the expense of the government’s ability to keep secrets from the people they are tasked to protect.