North Korea threatens the US

It is just the start of 2017 and the US is already hearing threats from other countries. Not only that, but Donald Trump has not even entered presidency yet and there are threats to the Trump Administration. Most recently,  North Korea’s infamous dictator Kim Jong-un announced that North Korea has the power to launch an intercontinental ballistic missile “at anytime.” The missile supposedly has a range of over 3,400 miles, making it able to reach and hit the United States mainland.

Many news sources are stating that North Korea is baiting the United States and deliberately annoying and taunting Trump to get a reaction out of him. It worked, with Trump reaching out viw Twitter to assure Americans that “It won’t happen.”

Riley Hoke (12) states, “I think they are bluffing. Even if they were to do anything, America would annihilate them.” He is not worried about the threats and thinks that America shouldn’t be worried either. Even if it were to happen senior Grace Megdan (12) says, “We live in Michigan, we’ll be fine.” Geographically, the logic makes sense, at least for now, and from this particular threat. Substitute teacher Matt Minor also had something to say on the subject. “I don’t give it much thought, in the news they said it wasn’t as great as they talked it up to be.” He also said, “I’m not too worried, especially since I lived through the 70’s and 80’s, where  it was a lot more common.”

Conclusively, it seems to look like the threats by North Korea coming to the Trump Administration could just be a bluff. While this immediate threat might be greatly exaggerated, CIA Director Gen. Michael Hayden warns against the dangers of counting North Korea out entirely. “I really do think that it is very likely by the end of Mr. Trump’s first term the North Koreans will be able to reach Seattle with a nuclear weapon onboard an indigenously produced intercontinental ballistic missile,” Hayden said on MSNBC’s show “Morning Joe.” 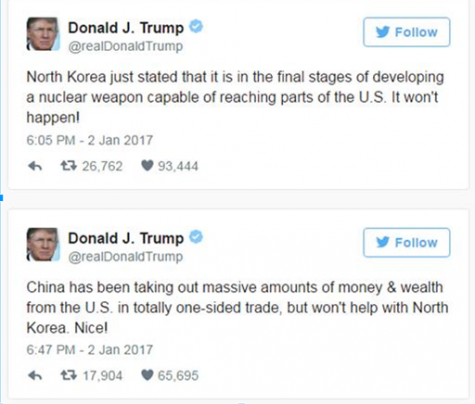