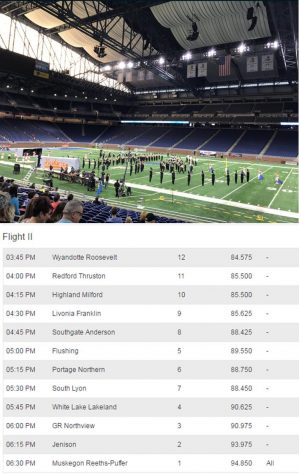 NL Staff
The Portage Northern marching band came back from Ford Field in Detroit with a positive feeling, finishing in sixth place in the state competition. The band set a school record at the event, scoring an 88.75, their highest competitive score ever. Director Josh Bartz expressed his pride for his kids, saying, “I’m super proud of the hard work of the student leadership team that put together such a successful run. This band is the hardest working group of kids we’ve had in years, and really, it came to light as an amazing performance at Ford Field, that they should all be very, very proud of. This is a remarkable, new high watermark for the band program, and I look forward to seeing what the future holds for them.” Drum major Ezer Gill echoed Bartz’ sentiment. “States this year was definitely unlike anything else, and one thing that we really wanted to push this year was this urgency to pursue a performance rather than a number. We just wanted to go out there and just perform an incredible show, and that’s exactly what we did,” he said. The marching band is satisfied with the way they performed, and hope to carry this momentum into next season.