Like road trips, HoCo 2016 is measured by the moments, not the miles 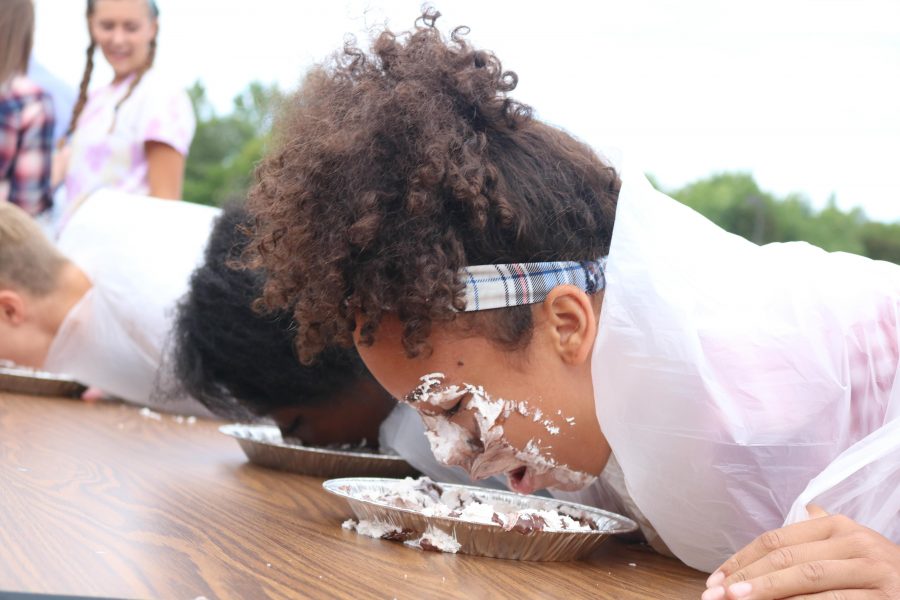 Sanai Gibson (10) tries to lead her class to victory in the Homecoming pie eating contest.

Perhaps the most anticipated event of the fall, it’s that time of the year when all four grades compete with one another to win Homecoming week.  After five days of fun-filled events that included dress up days for Twin Day, Mismatch Day, Denim Day, Class Color Day, and School Color Day and games like car push, pie eating, Hungry Hungry Hippos, and Tug of War, the seniors won the grade competition. The sophomores came in second and the freshman and juniors tied for third. Friday, September 16th was the annual Homecoming football game and dance and the team increased school spirit by pulling out a narrow 3 point victory over a tough Niles team (24-21).  Other stars on the night were the marching band, who took the field for halftime and lead the SuperFans in the stands with the pep music. Unfortunately, due to their dedication, many band members were unable to attend the dance. “There was only thirty minutes left when we actually got out of the football game and back to the school,” said color guard member Kaelin Rork (11). “I think maybe a couple band people went for the last half hour.” The same was true for the cheerleaders. “I had to rush right over there from the game,” said Anai Freeman (10). “I would have liked to spend more time there.”

Most who attended the Homecoming dance enjoyed the experience. “It as fun to hang out after the game and celebrate the win,” said Gabby Byers (10). “One of the downsides was that not a lot of upper classmen went, though.” Korday Arnston (10) agreed. “It was smaller than I imagined and more like a hang out than a dance. There was also so much drama! I kept walking past groups of people crying.” Komalpreet Kaur (9) viewed the dance very positively: “I had a good time and the actual dancing was fun. Also, the bus shuttles were a good idea, though in the future they should be more advertised and better managed.”

The main VIPs on Homecoming evening were the court. Court members and winners by grade were as follows:

Overall, with the football win, school spirit, and halftime performance by the band, this year’s homecoming “road trip” is one that likely won’t be soon forgotten.