Brown and orange to red, white, and blue: Portage Northern’s own Andrew Evans qualifies for the Olympics 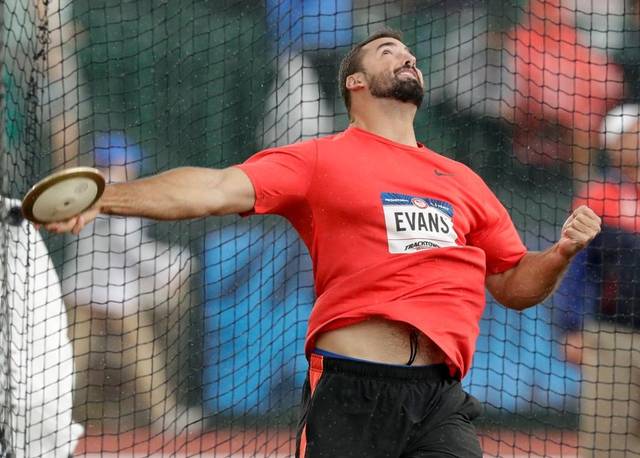 The Olympics are back in action and the world will once again come together to cheer on their country’s athletes. The United States looks to top the medal count again, just like they did in 2012. PN Huskies will also have the unique opportunity to unite to watch alumni Andrew Evans throw discus in Rio.

That’s right, Andrew Evans will represent PN in the Olympics and he’s got a realistic shot at a medal. His throw of 200′ 10″ -in the rain- was good enough for 3rd place at the Olympic Trials, but his farthest throw ever is 217′ 7″ and he has thrown 214′ 7″ this year. The current gold medal favorite, Poland’s Piotr Malachowshi, has thrown 223 feet this year, a mark that, on a good day, could be within striking range for Evans.

Evans worked very hard every day to get to where he is now, training for 2 years after he graduated from college specifically for the Olympics. “I moved to Chula Vista to work with Mac Wilkins (former world record holder in the discus) at the Olympic Training Center,” he said. Reflecting on his work leading up to the Olympic qualification, he added, “The most important training I did was visualization and organization. These were things that in college I took for granted. When it comes time to compete on a large stage such as the Olympic trials you have to make everything within your control as easy as possible.”

While at PN, Evans was a three time all-state performer, two time state champion, and recorded the 8th all time farthest throw in MHSAA discus history. He then threw discus at the University of Kentucky, winning the SEC discus competition and being named an All American and a first team All SEC athlete in 2012.

His former coach at PN, Ahren Kaylor, described the first moment he knew Evans was special. “8th grade. (Track and field coach Tony) Moon organized a training session with a former PN thrower and Andrew qualified for Junior Olympic nationals within three weeks.” Evans had a colossal frame even in middle school, which inspired Kaylor and many others to start calling him ‘Mandrew’.

Kaylor describes Evans as ‘ultra quiet.’ “They (Evans and his best friend Bert Hopkins) would call me on random evenings to open the gym so they could get in extra reps and play shot put, like playing catch in baseball,” he says.

He also talks about Evans’ extreme dedication. “Andrew would try to hit buildings with his discus. Buildings no other competitors were even close to hitting. At an indoor meet, he would hit walls in shot put and they didn’t know how to measure his marks since the discus didn’t land on the floor. They ended up moving the ring back.”

Evans will be in action in Rio for the first time in qualifying rounds on Friday, August 12. If he advances through the qualifying round, he will throw again in the final the following day, which will air on NBC. “It’s a once in a lifetime moment,” said Kaylor.
While it is Evan’s first Olympic moment, it is not the first time in recent history that Portage has been in the Olympic spotlight: Soccer player Lindsey Tarpley earned back to back golds in 2004 and 2008. With the dedication and practice hours already logged, Huskies will have to wait to see whether or not Portage will have another Olympic medalist to add to the city sign.
Delete Image
Align Left
Align Center
Align Right
Align Left
Align Center
Delete Heading