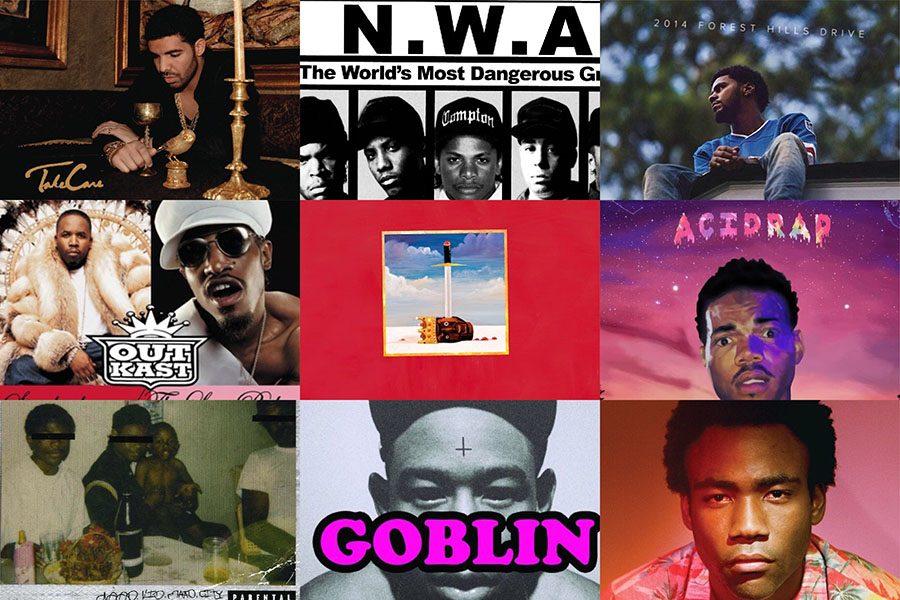 Originating from the idea of rhyming stanzas behind a beat, the sound of rap music has drastically changed as well as its audience. The basics of rap music is traced back to 1973 when the first DJ, DJ Kool Herc, began using two turntables to create music for parties. Later on, he drafted his friend Coke La Rock as MC. Within years they began to gain popularity and a little while later they produced what is known as one of the first rap songs ever. The SugarHill Gang recorded “Rapper’s Delight” with one single take and though not the official first rap song recorded, it was the first rap song to popularize hip hop music in the United States and from then on, it’s history.

Up until the 90’s hip/hop and rap was almost an unknown genre. Artist groups such as N.W.A, Wu Tang Clan, Outkast, the Gorillaz, TLC, Aaliyah,and Tupac created the basis for the hip/hop and rap genre. With provocative lyrics involving the degradation of women, drug usage, and gang violence with titles such as “F*ck the Police” by the N.W.A and “Make it Nasty” by Tyga, it is clear that rap music has always been controversial.

“In general, yes, rap music is degrading but not all artists such as Childish Gambino degrade women,” says Eli Cartier (11).  Depending on the artist, the amount of cursing, drugs, and degradation vary.

Though rappers who brag about alcohol and women flood the top charts, there are a few mainstream rappers who rap about real issues and have a positive influence on adolescents. Kendrick Lamar is a strong advocate for the Black Lives Matter movement and raps about the struggles of the streets rather than romanticizing it which sends a positive message to the youth generation. ” Kendrick is the best lyricist out there, he’s cold and poetic” says Cortland Hasenburg (11).

It’s clear to see that the rap genre’s audience continues to grow with over 30 rap albums released thus far in 2016, including Drake’s Views, Kanye West’s The Life of Pablo, and Chance the Rapper’s mixtape, Coloring book– and the album sales are not slowing down. “Rap music is different because it has a story behind it,” says Issra Said (10).

The everlasting question of whether or not rap music influences the daily life of teenagers is entirely up to the individual himself. “ I think rap music  encourages drug use extremely,” states Nate Chaplean (11). The maturity, or lack thereof, is what determines how much of an influence listeners music choice can have on their perception of their own life and other people as well. “I think it’s fine to listen to rap music and still be a perfectly good kid; just because a song refers to things like sex and drugs doesn’t mean you have to be into stuff,” says Isabella Metzner (11). Having the ability to tell oneself that just because you can rap to a song about drugs without even actually coming near them is what separates the populace of people who listen to rap.

Music is an extremely influential and important aspect to everybody’s lives around the world, breaking socioeconomic status, culture, language and other barriers. Though vulgar and degrading at times, rap music may or may not be a genre you enjoy listening to, it creates an impact on lives for the better or worse.