Eye for an eye: pro-gun control 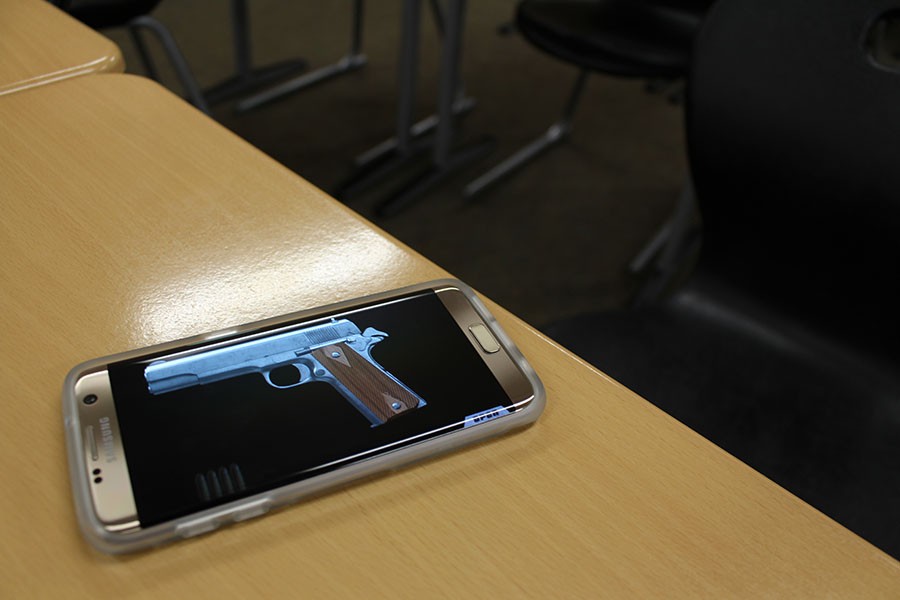 “There is a gun for roughly every man, woman, and child in America,” said President Barack Obama, after the shooting that took place at Umpqua Community College in Roseburg, Oregon that killed ten. How can someone hear that and hold a straight face?

In 1996, Australia discovered the absurd behaviors of people. A gunman shot 35 people with semi-automatic weapons in Tasmania. Then, less than two weeks after one shooting, their government put several gun laws that have been so strong they still haven’t seen a shooting since (bbc.com). Is this what America needs?

In 2015 alone, there have been 294 mass shootings. Guns are weapons of mass destruction, a weapon that holds power and control. Something that is not needed in today’s’ society, and they kill more than they protect. Often times when people kill other  people, it is due to a wide variety of things, such as personal relationship problems, history of violence, mental illness, drugs and alcohol abuse, and surprisingly easy access to bear arms.

On average 13 children under the age of 19 are shot and killed by gunshot per year (sks.sirs.com). Serious gun control can minimize the trauma and fear people have throughout America. Think of self defense for a moment. What comes to mind?  I think of protecting yourself from various situations, yet using a weapon is not the answer, defensive gun use is very rare. Surprisingly, owning a handgun increases a person’s risk of being killed, which may seem untrue, but 24% of victims in a dangerous situation actually grab their gun and about 1% of the 24 took out their guns and fired them, that’s about 127/14,145(sks.sirs.com). By the time one pulls out a gun and makes sure it is ready and loaded, the shooter could have already attacked. “People in our generation seeing how others react to small situations in such a big way, affects them,” said Drayke Simpkins(11), showing concern for the young people in our society who could be influenced by today’s social issues. Many teens are very active on social issues on the internet in today’s society. Guns and violence can affects the way they view their fellow Americans and lead them to fear and dislike many people.

In addition to this absurd information, hundreds of thousands of people’s household weapons are stolen, and end up in a criminals hands. That is the last thing we need.

Gun control will decrease the amounts of homicides, yet more gun laws do not necessarily mean less gun crime. Limiting the people down to owning one handgun is okay. No one necessarily needs one… Don’t get me wrong, I understand why you think you might, but one man per gun actually would cut the gun crime in half. States with the most strict gun laws have the lowest gun murders. Surprising? I don’t think so.

Yes, I understand the second amendment states that every man has the right to bear arms, but no one said how many, what kinds, and the amount of training we must be required to go through. More than half the gun owners in America haven’t even had formal training. “Well, I’m a big Second Amendment person. As an example, for the horrible thing that just took place in Oregon had somebody in that room had a gun, the result would have been better,” said Donald Trump, discussing the shooting that occurred at Umpqua Community College in Roseburg, Oregon. If anyone in a classroom had a gun, either the teacher could use it poorly, or the students could find it and become curious and fire it. People as young as 12 are capable of hurting themselves and one another, and children as young as 4 start using weapons as either a family tradition, or parent choice (cbs.com). Consequently, providing weapons in schools is the wrong move. School is a place to feel safe, and happy not a place of fear and danger.

From Columbine, to Tucson, to Aurora, to Newtown, these incidents don’t seem to decrease gun sales, but increase them. In fact, after Newtown, Conn., there was a mass production of weapons, a substantial number of 11 million (cbs.com).

As much as guns are a part of our heritage, so is the discomfort with guns. Maybe Australia was right.