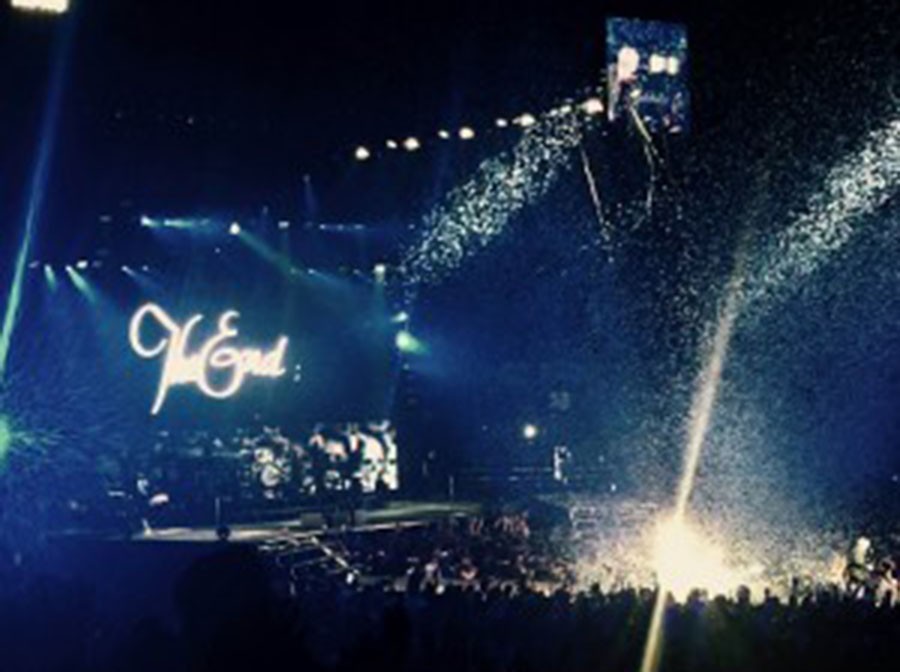 For the fifth year in a row, Fall Out Boy revealed in October 2015 that they would be headlining a winter tour called “Wintour.” This year, the band hit the road with PVRIS (pronounced “Paris”) and Awolnation for a 23 city tour, starting on February 25th in San Juan, Puerto Rico, and ending on March 27th in San Francisco, California. As a part of this tour, the artists stopped at Van Andel Arena in Grand Rapids, Michigan on March 8th. As avid FOB fans and general music lovers, Genna Goist (10) and I attended this concert. From the fantastic set list to antics on stage, this night was one that fans will never forget.

Although concert-goers talk most about the headliner of the concert, the two opening acts gave the audience a memorable performance and a new appreciation for their music. PVRIS was the first opening act and definitely left a mark on the audience. Although it did seem as though most people were not familiar with their music, most of the crowd ended up standing and cheering only two songs into their set. The next act was Awolnation. Going into the concert, I only knew their songs titled “Run” and “Sail,” as nearly everyone does now, but being exposed to some of their other music truly gave audience members a whole new respect for the band. Upon reaching “Sail,” the last song of their set, nearly the entire crowd was on their feet and singing along. Through these two performances, the music pleased and pumped up the crowd while leaving them with a new appreciation of their work.

Finally, Fall Out Boy was next in line to perform. As the crowd patiently yet excitedly waited for nearly 30 minutes following Awolnation’s set, Fall Out Boy took the stage and the crowd went insane. Screams rang through the entire arena as the band started their show with the song “Irresistible” from their new album American Beauty/American Psycho. Song after song, the band gave an amazing and high-energy performance that kept fans cheering and dancing to the music. I’ve seen [Fall Out Boy] three times and the environment is incredible, especially when the crowd sings,” said Jason Taft (12).

One of the highlights of the night was when bassist Pete Wentz told the crowd that no matter what happens, through stress and anxiety and depression, we will all be okay. The band also gave a huge shoutout to all teenagers, which of course represented a majority of the crowd, and how amazing they are.

After the adrenaline of the past songs and motivational speeches, the rest of the concert was even louder and even more enjoyable. However, the music was not the only part of the show that the crowd loved; the lights from the stage, giant balloons being bumped around, fake snow coming from the ceiling, and pyrotechnics at the end of the show brought a huge wow factor.

For those who have never seen the band live, most can agree that the concert was a high-energy, loud, and fun experience. Nayah Wiley (12) said, “My favorite part was that it was my best friend’s first concert and I got to take her to it.”

– The Takeover, The Break’s Over

– Save Rock and Roll

– Grand Theft Autumn/Where is Your Boy?

– My Songs Know What You Did in the Dark (encore)