The best of the best teacher friends at Portage Northern 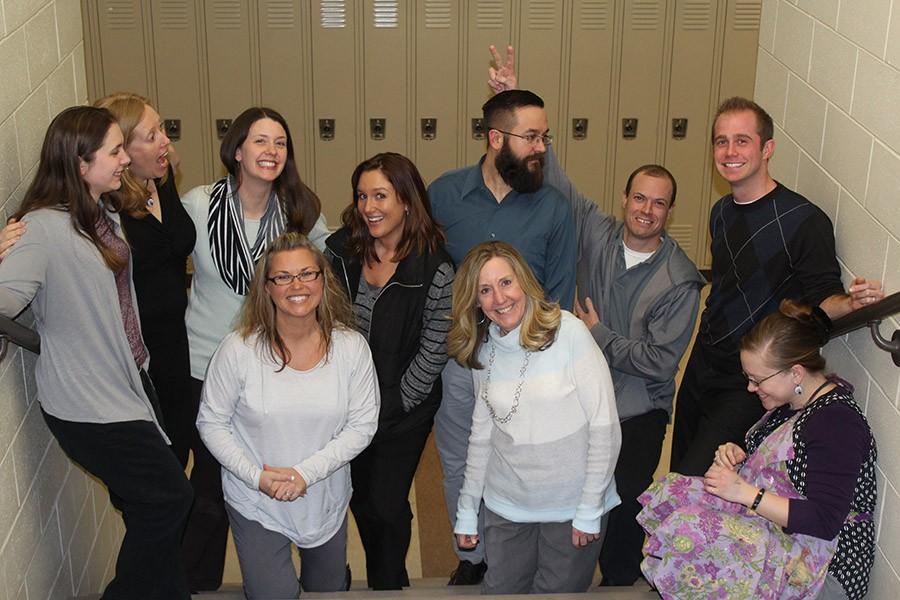 A crowded hallway filled with students trying to get to their next class, the stress of the possibility of a tardy circulating their minds, and a group of friends are standing in the middle of the hallway, blocking nearly half of it. But this is not the classic rebellious group of teenagers that one would expect to take up half of the hallway; this is a group of teachers who only have time in between classes to talk to their friends during the school day.

For most teachers, this scenario is true to their routine work day, and because of this, most teachers have specific co-worker friends that they tend to exclusively talk to and hang out with. Students here at Portage Northern have noticed these groups of teachers — or, as some would call them, “cliques” — that particularly stand out to be exclusive with only one another.

One of the most well-known teacher cliques at Northern is the math teacher clique, which more specifically includes Mr. Dee, Mr. Eustice, Mr. Hebner, Mr. Laing, Mr. Messing, Mr. Shaffer, Mr. Stevens, Mr. Swinehart, and Mr. Swoboda. These teachers are normally seen either grouped together in the hallway right outside of their classrooms or grouped into one of their classrooms. “I’ve seen Messing and Swoboda and Hebner all grouped up in Swoboda’s room just talking. It usually happens every day,” said Bryce Page (10). Most likely because of their close proximity and shared course content, these teachers have become close friends over the years and are seen as one of the strongest teachers cliques at Portage Northern.

Another power clique of teachers at Northern is the science wing clique, specifically including Mr. Armitage, Mrs. Clark, Mrs. Hertel, Mr. Killmer, Mrs. Kozian, Mrs. Mason, Mrs. McConney, Mrs. Mirakovits, Mr. Olsen, and Mrs. Poulsen. This group of teachers can normally be seen together during lunch or even occasionally visiting each other’s classrooms. “Today, Mr. Armitage came into Mr. Killmer’s class, said that he thinks Dora is on drugs, and then left,” said Alex Kramer (12). Most definitely, these teachers enjoy joking around with each other and having fun during the school day. They are probably the main teacher clique in this school that is most comparable to a group of teenage friends; they seek each other for comic relief during the school day and they all hang out together during lunch. What a great group of friends!

However, not all teacher cliques include a big group of members; some can even include just a couple of close friends. “Ms. Paynich and Ms. Rath hang out but they don’t come into classes and distract things,” said Nirvisha Singh (10). These two teachers are usually seen hanging out with each other at random times during the school day, but they also hang out outside of school, just as all friends do. “They’re teachers. They’re each other’s friends. They have their friends, we have ours, and they do what we do,” said Singh. Yes, it is sometimes strange to see teachers hanging out together outside of school, but it should not be so strange. They are normal people who are each other’s friends, and they do what normal friends would do.

It is undeniable that there are certain groups of teachers at this school who specifically hang out with each other, giving each group the image of being in a clique. However, the proper term for these groups is friends because the fact that they are teachers does not make their friendship any different from student friend groups. “It’s like they’re human beings,” said Kramer.