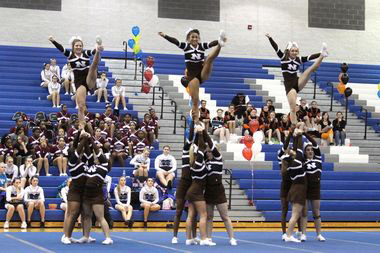 “One of the biggest things that people don’t know about cheer is that it is the newest girls’ sport in the state of Michigan, being only 20 years old, but it’s also one of the fastest growing sports,” says Coach Prentice. Competitive Cheer requires high energy, agility, and commitment. “My favorite thing about cheer is the bond I have with my team, we’re so supportive of each other and I’d trust them with anything,” says Ailee Pearce (11). Competitive Cheer differs from sideline cheer by many factors like being considered more of a “sport” aspect than the sideline cheer support aspect. “It’s really about the girls and their sport, honing in on their skill and getting to showcase just them. It’s not a support team but it’s a sport team that competes in itself,” says Prentice. Competitive cheer is also more rigorous in the stunts that are completed and the events are more synchronized and energetic.

“There are three different rounds. One is just chanting, the next is chanting and tumbling, and the last is stunting,” says Lexi Kava (10). Competitions are set into three separate parts so that the girls can really show their individual and team strengths. “Their jumps, tumbling, and stunting are real specific and synchronized so everything has to be one unit,” says Prentice. Competitive Cheer starts in November, just like basketball, and ends in the beginning of March with 12 competitions, districts, regionals, state finals, and many hours of grueling practices in between.

“My kids get tons of scholarship money because we go to different meets that offer scholarships for competitive cheer through our different organizations,” says Prentice.

This money comes from their performance at these meets since they are scholarship funded. The amount and number of scholarships given are usually decided before the meet and how much money the meet coordinators have raised during their fundraisers.

Cheerleading has the stereotype of being easy and not an actual sport which is not true at all. It is filled with rigor, strength, and a great deal of teamwork. “It’s difficult. It’s not just pretty girls in skirts like the old fashion philosophy is. They are athletic, they workout, and they condition. I definitely hold them up to a high standard and I don’t think a lot of people know that about us,” says Prentice.

Top 10 Cheer Colleges in the US: