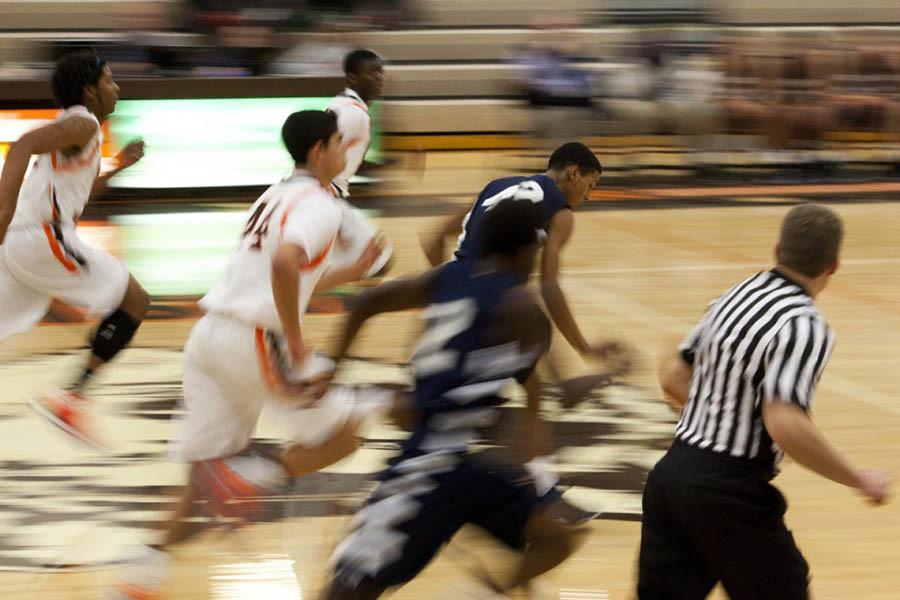 For the basketball team, Tommy Henry (12) says both men’s and women’s basketball teams have common goals. “We want to be better than we were last year,” Henry said with a glint of determination in his eye. “We want to win the first district title [Portage Northern] has won in a while, and then we’ll see +where it takes us from there.” Each winter sports team possesses the desire to succeed in their respective sport, but more importantly, they have the work ethic to get to the highest possible level; this season, all basketball teams here at Portage Northern have the work ethic to reach that highest level.

Any sports team has rigorous training they must undergo to reach their team goals, and Portage Northern’s Competitive Cheer team is no exception to some of the most rigorous pre-season training around. Ailee Pearce (11) has been on Portage Northern’s Competitive Cheer team for three years now, and she and her team understand all the necessary components to being a successful team. “We have constant conditioning and tumbling class,” Pearce informs. The practicing of any sport is crucial, but for the cheerleaders, it is also dangerous. Unbeknownst to many people, competitive cheer is the leading sport for concussions among high school sports, and this means not only is a great work ethic necessary to succeed in competitive cheer, but a great sense of chemistry as well. “We have team sleepovers and we go out and get food together,” Pearce says about team bonding. The work ethic and strong bond the cheerleaders have is a  true marvel, and it will take them to the places they want to be this season.

Hockey is one of the more brutal sports in a high school setting, and makee no mistake, to be able to compete in such a physical and challenging environment, Northern’s Hockey Team works just as hard, if not harder than any other sport. The conditioning that the hockey team goes through is extremely vigorous. “In tryouts you have to be able to run up to a mile in seven minutes, 100 pushups in three minutes, 10 pull-ups in 30 seconds,” Jack Budnick (12) explains. However, as Budnick knows, the requirements for having a great hockey team go beyond chemistry and conditioning, they also extend to succeeding at a high academic level. “We’ve had the top average GPA in the state,” says Budnick. The teamwork being shared inside the classroom and on the ice is evident for the hockey team, and teamwork is crucial to the hockey team.  For if the puck is shared between the team properly, then so too will success.

Physically demanding winter sports seem to be a commodity here at Northern, and still another sport that may be more physically demanding than any other, is Water Polo. The premise of Water Polo may be unknown to some. Dakota Lorenzen (12) says that “Water Polo is a lot like soccer… if soccer took place while you were swimming in a ten feet deep pool where the rules are that whatever the referee doesn’t see is legal.” Constant swimming exercises as well as on land running conditioning help the water polo team stay in the best possible shape for games. With a work ethic like this, Portage Northern’s Water Polo team can meet their aspirations of success just as much as any other winter sports teams.

All sports are physically demanding, yet not all sports involve all of a person’s physicality, however, Wrestling demands just that of every competitor. Portage Northern’s Wrestling Team has had a recent history of success since Coach Furlong arrived at the school a few years ago, and the team looks to continue that success this season. “Everyone has their own individual goals, but as a team, our goal is to win regionals,” says Nolan Smith (12). The conditioning undergone by the wrestlers is extremely preparatory but very difficult “Between running, sprints, running up hills, live wrestling; we always give 100%,” Smith states. With a work ethic like this, and Coach Furlong leading the way, any summit for Portage Northern Wrestling this season is attainable.

Finally, what winter sport defines winter better than a sport that cannot exist without it? Skiing. Some uncommon knowledge here at Northern, is that there is in fact, a ski team. The team practices at local ski resorts such as Bittersweet or Timber Ridge, training to compete against other teams in a variety of racing events. Coordination is key in training to ski, and a wide variety of balancing conditioning as well as downhill conditioning. Portage Northern’s ski team looks to compete at the highest level this season. Contributing members present the team with a sense of community. If all these aspects fall into place this season for Portage Northern’s Ski Team, there is no telling how high they will fly.

Whether it be the sound of a ball swishing through a net, the cheers of your teammates beside you, the scraping of ice skates along the rink, the splashing of competitors all around you, or the sound of skis rushing over a blanket of snow, it extremely evident that this winter will be one to remember for Portage Northern sports.