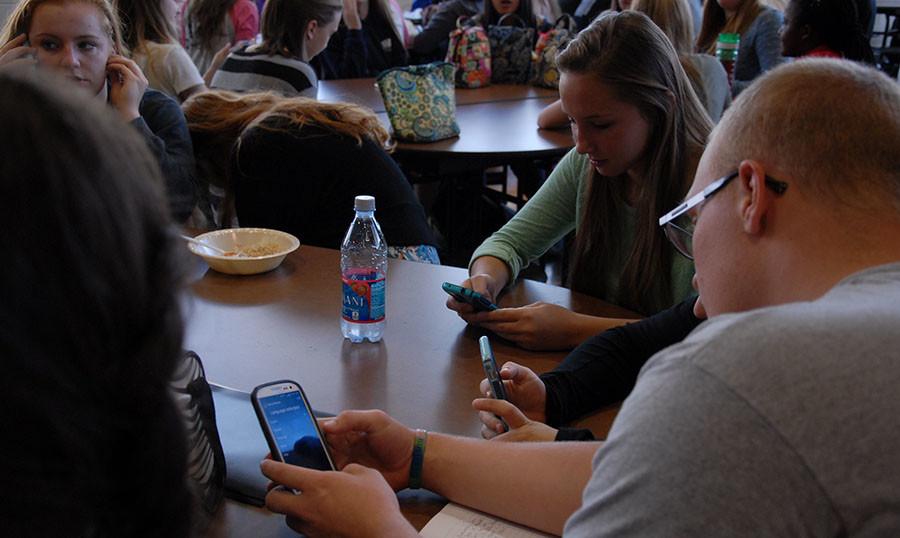 What’s in vs What’s out

As the user presses the screen, the anticipation grows as the ever so popular Instagram app opens into view. As the first picture slowly loads, the anticipation fades and we think to ourselves, “this again?” Trends are seen through all types of social media and a majority of people follow them. These trends flow in and out and range from exciting to obnoxious, but trends tend to fade, only to be replaced by another. They come and go as their crowd waits patiently behind the screen waiting to see what’s in on their feed and what’s out in society.

One prominent trend, especially going back to school in the fall, are senior pictures. “It honestly just shows your transformation, and everyone does it to show that you are finished with high school,” says Megan Alfieri (12). Senior pictures help capture all of the three years of hard work and show off that you have finally made it. “Everybody does it and it’s a big milestone,” said Ryan Daniel (10). Posting these pictures on social media not only is exciting for that person, but it’s also very cool to see other’s too. “I think it’s really cool to see everyone graduating from high school and getting it over with,” says Alfieri.  All seniors are guilty of the common phrases as they are getting all gussied up such as “I’m so excited to post these” or “these are honestly going to get so many likes.” “I haven’t gotten my senior pictures taken yet, but when I do, I will definitely post them because that’s what people do,” says Alfieri. And who wouldn’t want to post an awesome photo to resemble the fact that this is the last year of high school?

“I’ve been seeing a lot of depressing pictures on Instagram,” says Kaitlin Wilson (11). Depressing pictures posted all over social media, from dark quotes to gloomy faces, the depressing posts come unexpectedly. “Since we are back in school bullying comes back and the depressing posts return,” say Kylei Hurd (9). When school is in session, the posts slowly trickle back in from bullies or honestly just stress. “I feel bad for those people and I just want to help them get through that stage in their life,” said Hurd .The honest response from most people would be to help the one’s who are struggling and help them feel better.

On the other hand, some people feel that these depressing posts are just one of the many ways to gain attention from others. “I feel like people think that these posts are things that society wants to see or they want attention from it,” says Wilson. Society is making people think that channeling a depressing atmosphere when posting things is what’s in. People want to look at their social media and have happy thoughts instead of being overwhelmed with sadness. “Everything I see and would like to see is pretty positive,” says Daniel.

Trends are what make social media interesting and so addicting. “I’ll probably follow these trends because I assume everyone else will be doing it,” says Zach Bossch (10). With each trend the crowd continues to come back for each new trend to follow it because it’s “the thing to do.”  So post things the world wants to see and keep the social media fire forever burning.

Over the summer, there were various popular twitter trends, some causing more controversy than others, specifically the #Don’tJudgeMeChallenge which caused heated controversy.This hashtag typically caused people to draw aspects that they might find to be “unattractive” such as unibrows, acne, or missing teeth etc.  They would then make faces at the camera showing off their new,“unattractive” qualities. After a few seconds they would put their hands up to the camera to block its view, and when they took it away, they would suddenly transform into what seemed to be a totally different person but in fact was the same individual seen making faces at the camera several seconds earlier. However, the original person had rinsed off their drawings, sometimes put on makeup and done their hair without a single flaw in sight.  The “moral” of the challenge was that the user shouldn’t judge others right away because they might actually end up being attractive.

Sometimes the challenge seemed harmless, “People can do whatever they want, honestly the challenge didn’t really have an impact on me, and I don’t think anyone else should worry about it either,” says Anonymous. Though, it’s no surprise not everyone was in favor of this challenge. Other times, teens thought that what was being portrayed was disrespectful.  “Personally, no one that I knew had done it, but everything that had been said/done by the other people I’d seen was quite rude and uncalled for,” says Sophie Morin (12).  What many people also did not know was that the challenge started off as an anti-body shaming campaign.  “I did not know that, and yeah it would surprise me because it seems like a total joke,” says Ben Lewis (10). To have a serious campaign dealing with not looking down upon others looks and suddenly come to be the complete opposite says a lot about our society. “No, I did not know that, but then it spiraled into something more? That’s quite a shame,” says Morin.

Overall, many feel as though this challenge says more about the person making the video than the imperfect individual.  “I think that’s wrong and it makes them look like more of an idiot than the other guy,” says Lewis.  Sometimes the self-proclaimed  “pretty people” are the ones who need to boost their confidence through a challenge that degrades other people’s confidence. “It glorifies perfection and doesn’t celebrate imperfection and flaws, which make us unique,” says Morin.

The clock strikes midnight. An alarm will be going off in six hours. It would be wise to catch some sleep. Okay, okay, but just one more tweet! The last ten years or so have seen the rise of various social media platforms, and there are new ones popping up all the time. The world has gone from MySpace and Facebook to Instagram and Snapchat. There are very few people who don’t use social media in some way, and many use more than one of the services listed above.

Social media can be a great form of communication and entertainment, but it seems to have grown into an obsession and a distraction from real life, especially for younger people. A recent research report from the University of Glasgow reveals that the pressure on students to be available on social media 24/7 has become a major factor in reducing sleep quality. “I think it’s pretty bad if people are losing sleep over social media, or if it’s keeping them from their daily lives,” said Keith Ball (12). This has become a serious issue because adolescence is a time of greater vulnerability to the onset of depression and anxiety. The lack of sleep caused by social media can increase the risk of that onset.

In addition to being distractive, social media is often capable of quickly spreading negativity. Society has arrived to a point at which many social media users have some degree of emotional investment in their online lives. With that said, people are impacted based on what is said or not said about them on social media. Moreover, cyberbullying has caused depression and even some suicides in the past and it continues to do so. The amount of hatred users post and the high rate at which it spreads can quickly create an overwhelming situation for the victim. “It’s terrible that people are committing suicide over the hateful things that are said or posted on social media,” said John VanderMeer (11), “that’s not how social media should be used.”

Social media certainly is a powerful tool, but with great power comes great responsibility. Yes, it’s a cliché, but it still needs to be said. There are many ways that social media improves society, but the negative impacts that result from obsession and cyberbullying are outweighing these benefits. “I think social media is definitely a very powerful thing and it could do a lot for the world if it was used in the right ways, but that just isn’t happening,” said VanderMeer.