Disclaimer: brain cells may be lost

A review of "Dumb and Dumber To" 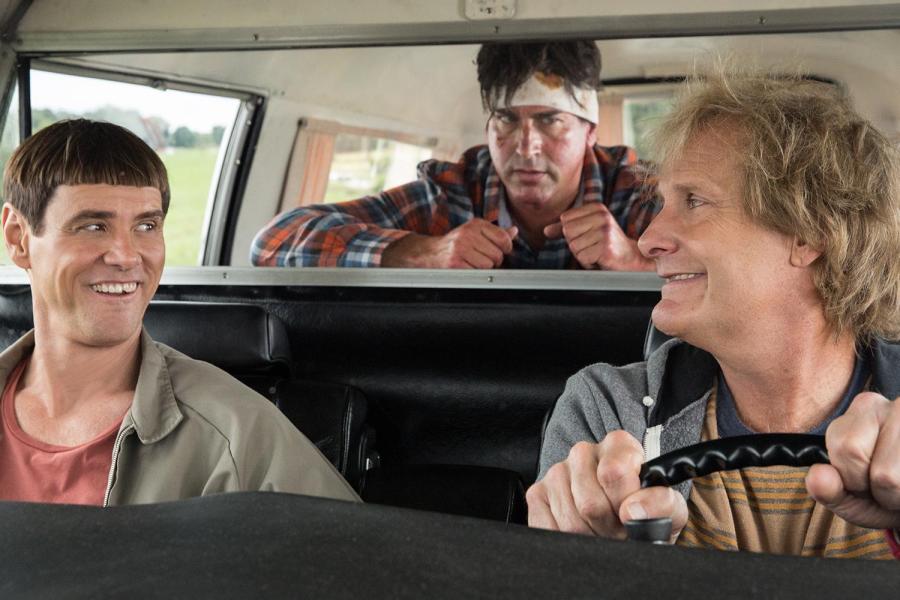 “We got no food, we got no jobs, OUR PETS HEADS ARE FALLING OFF!” Wow, sounds like a bummer, but Lloyd Christmas and Harry Dunne have come a long way from this state of starvation and headless pets. Directors Peter and Bobby Farrelly have done it again with their sequel to the classic “Dumb and Dumber.” “Dumb and Dumber To” brings forth the comedy of the original film along with a genius new story line.

In this movie, Lloyd (played by Jim Carrey) and Harry (played by Jeff Daniels) go off on an adventure to find Harry’s long lost beauty of a daughter; they inevitably run into some trouble along the way. Harry is in desperate need of a new kidney, and Lloyd, being the excellent best friend he is, volunteers Harry’s daughter, Penny (played by Rachel Melvin), to donate one of her kidneys to her dear old dad. Despite the fact that they have never actually met, Harry is sure that Penny will donate the kidney, so they take off to Maryland. Along the way, they fight some bad guys, set off a few fireworks, and give some of the best one liners ever heard.

On a scale of one to Beyonce, “Dumb and Dumber To” earns a strong Rihanna. By the end of the movie, the viewer will fall in love with the characters and leave wanting more of the slapstick comedy.  No more than five minutes went by without a roar of laughter going through the theater. It is nearly impossible to not be captivated by the antics of Lloyd and Harry. This movie keeps the viewer feeling nostalgic as they recall the original film, while enjoying this new chapter in the lives of these two men. The only thing that kept it from Queen B status was the amount of vulgarity in the movie. It would have been just as funny without the language and sexual content. These negative factors kept it from being a movie that is appropriate for the entire family.

Until next time, just remember the wisdom of Lloyd Christmas: “Life is a fragile thing, Har[ry]. One minute you’re chewin’ on a burger, the next minute, you’re dead meat.”