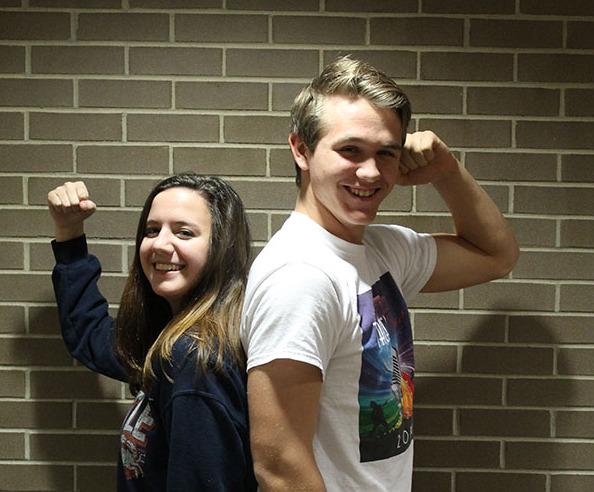 Callista Brown (11) and Jean-Luc (12) are flexing for the battle of gender equality.

Male-hating, bra-burning, protesting warriors. Short hair, hairy armpits, and a passion to destroy the patriarchy. These are common stereotypes of a feminist. But in reality, there isn’t a contract that feminists sign agreeing to throw away their razors and wax, take a lighter to their lingerie, or go picketing outside of governmental buildings. Feminists believe in feminism, and that is the only true requirement.

fem·i·nismnoun \ˈfe-mə-ˌni-zəm\: the belief that men and women should have equal rights and opportunities

“I have no idea what [feminism] means. Does it have to do with femininity?” said Matt Kralick (10). It isn’t surprising that with a word putting it’s focus on “feminine,” we often get confused about- what feminism really means. Many people link  words ending in -ist to negative terms (racist, communist, sexist), so in our minds, the word feminist comes across as women thinking they’re better than men. Said Levi Hambright (12), “Being misanthropic [hateful] is no way to achieve any type of goal that is centered around people.” Society see feminists as hormone raged women who rip out the hearts of anyone who disagrees with their views. The intentions of feminism was never to be about hate, it’s about change.

Said Ian Holcumb (12), “They should change the name. It shouldn’t be called feminism, it should be [called] equality.” Maybe trashing the word feminism as a whole would create a fresh start- cutting down on the negatively received ideas. It would encourage more individuals to join the impacting movement.

Contrary to popular belief, men can be feminists, too. This isn’t something that is gender exclusive. “I like men who are feminists because they think girls can do anything guys can,” said Sophia Majewski (10). The more involved, the faster we can rid the distasteful culture of inequality. “I am definitely a feminist. I’m [absolutely] disgusted by the way women are still treated. It’s 1993 and some people still think we’re in the 1950’s. We need to make  more progress. There needs to be more female musicians, more female artists, more female writers. Everything is dominated by males, and I’m sick of it!”, said the famous Kurt Cobain of Nirvana. Step up to the plate and help break down the wall between genders.

In today’s society, we face many issues regarding injustice. “I don’t think that there’s a difference between a woman’s work grade and a man’s. Gender doesn’t show what work you can do,” said Catherine Willoughby (10). According to Google, women get paid 77 cents for every dollar a man earns. Why should anatomy affect what’s written on women’s paycheck? Said Lindsay Phelan (11), “We haven’t had a woman president because people think men are stronger leaders.” A break in tradition needs to take place to prove women have a purpose in the government. Providing females  with the same opportunities as males seems like the logical way to go about life. “Gender doesn’t determine what you’re good at,” said Kaci Farley (11). Education, sports, leadership, capability- not one of these traits should be determined by gender. America claims that everyone is created equal, so why not start acting like it?

Let’s continue the generation of “We Can Do It!” Take that first step- prove that we can do anything. There are no limitations except for the ones we put on ourselves. Speak up and be heard! Understand what needs to take place. Make a difference. Feminism isn’t about women with hairy legs, it’s about getting to a place where we should have been long ago. Cease seeing the world in X and Y’s. Let’s all be seen as one.