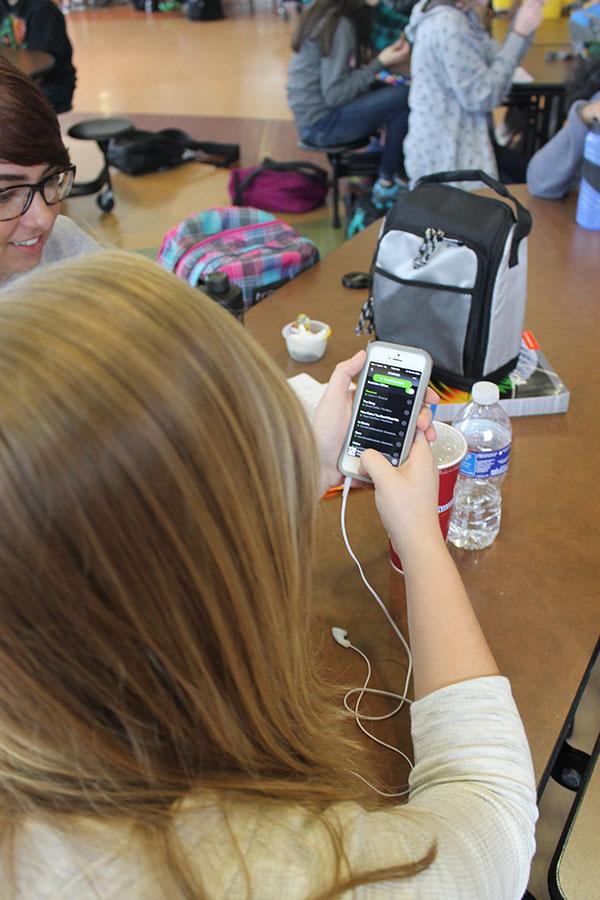 Mara Hazen (12) looks over her playlist.

For the better part of the last half century, rap music has dominated the sales charts, and the majority of peoples’ playlists.  However, today, with such a variety of new music being introduced, the question is whether or not the generation of rap music is over.

During the past 3 years, rap music has experienced a steady 12% decline in sales, after undergoing a series of rapid increases in previous years.  “As much as I like rap, it might not be around too much longer,” says Nathan Chapleau (10).  Whether that’s true or not is questionable because many think that rap music isn’t going anywhere. “ I think there’s a lot of people listening to it, and it’s still going strong,” says Madi Ford (10).

Statistics from statista.com show that indeed rap is in a torrential cold spell contemporarily.  As of now, rap is only the 6th most popular music genre in the United States.  In fact, from 2008-2012, its album sales fell behind rock music by a lusty 436.1 million.  In 2012, only 13% of people in a conducted survey answered rap as their favorite genre of music.  “There are other options that I like better,” says Brian Schreiber (9).

While this may be true, rap dominated the charts throughout the 90’s and early 2000’s with artists such as Notorious B.I.G, Snoop Dogg, 2Pac, Jay Z, Eminem, 50 Cent and others delivering album after album.  Eminem recently became the best-selling rap artist of all time, and the second best-selling male artist of all time.  While rap may be in a slight drought, those are statistics that prove a comeback likely.  As well as this, there is recent speculation on rapper 2Pac Shakur, and whether or not he’s alive.  If he were to return, it is evident that rap sales would burst to the tops of charts once again.

While the rap music industry may not be producing to the capabilities it would like to in the past few years, it is hard to say that it’s necessarily “over.”  With so many new artists emerging and so many new varieties of the genre being exposed, it may not be going anywhere.  “I don’t think rap will ever go out of style,” says Ben Stump (10).