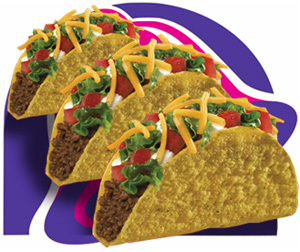 1. Pure American Food: Let us just throw this out there from the start; Taco Bell is not Mexican food. Nobody is arguing that. But that is no reason to not consider Taco Bell one of the best fast-food restaurants in the nation.

2. Doritos Tacos: Tacos are great as is, but when you change out the plain corn shell in place of a nacho cheese or ranch shell, the flavor will blow your mind. These Doritos Tacos could single handedly make Taco Bell the favorite fast-food restaurant.

3. Baja Blast: A perfect side to a number of items on the menu, this super blend of Mountain Dew and blue Powerade create one of the greatest drinks ever known to mankind. Cool and refreshing and with a distinct flavor, Baja Blasts are exclusive to Taco Bell.

4. Mountain Dew Freezes: In case an average drink does not catch your attention, Baja Blasts come in slushie form as well, not to mention two other forms of Mountain Dew. This drink will bring joy to anyone it comes near.

4. Happier Hour: Everyday from 2 to 5 P.M. Taco Bell offers several items for only a dollar. These items include any medium drink or medium Freeze drink and a choice of three delicious loaded grillers. For only a dollar, it will be difficult to find a deal better than this.

5. Taco Bell’s Twitter: Whenever a tweet is sent out containing the word Taco Bell, a response from the restaurant’s official twitter account is always a possibility. Their responses, often comical, is just another reason to love the fast-food chain.

6. Service: Taco Bell offers surprisingly strong service compared to similar chains. If an order takes to long to prepare, often times an employee will offer you extra food for free or give you your drink for free.

7. Open late: Ever had that midnight crave for a taco? Thankfully their drive through is open late into the night. Taco Bell is a perfect late night snack.

8. Taco 12 Pack: If there is one thing better than a taco, it is twelve tacos. Throw them all in a box and you have quite the meal

9. Price: With items starting at only one dollar, there is always something to fit your budget, whether it is Happier Hour or not.

10. New: Taco Bell is constantly experimenting with new menu items. It seems that every time someone sees the menu there is a new revolutionary product. You never know when the next “Doritos Taco” caliber product will be released.