Where We Stand – Not Quite 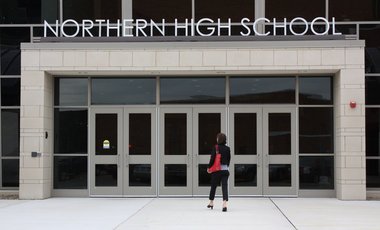 Although Portage Northern’s staff and students strive for excellence and to do their best, there is always room for improvement. Last year US News rated Northern one of the top ten schools in Michigan, which was a huge accomplishment, with its athletics and academics are highly praised. There are always those quirks about the school; however, that can put some students over the edge.
“I don’t like it when the teachers don’t teach well, like when they don’t prepare you well for big tests they surprise you with the next day,” said Andréea Hunter (10). Despite the teachers work as hard as they can to help the students achieve their goals and to achieve as much as they can, some students are not seeing the results. The current top school in Michigan, International Academy, has a college readiness index of 98.1, and Northern’s college readiness index is only 35.0. The recent academic-related issue has been the 30/30 MME results. Northern’s scores showed a top thirty percent who are excelling and doing really well in school, and the lower thirty percent who are not doing as well and need help. The huge gap between the two groups are bringing up a concern with the students and teaching. Is this entirely the teachers’ fault? No. But some particular teachers need to take a little bit of initiative and keep encouraging students.
“[The] school spirit is impressive, but it can be very annoying. People tend to think higher of themselves than their peers,” said an anonymous Mattawan student. As hard as the students try to be great, not all students from other schools think so. Portage Northern wants to give off a positive image to the community that is inviting through key components such as academics and sports. The image students have is usually important to them as well. “Some teams do [represent the school well] and others don’t because some teams have good people and are competitive and have good training and coaching and others don’t,” said an anonymous student. It takes a whole team and coaching staff in order for them to represent the school positively, as well as the students and fans to act appropriately.
Northern has traits that bother other schools, but it also has kinks that bother the students themselves, even some of the everyday things that cause annoyance. “There isn’t a snack vending machine, only a drink vending machine,” said Long Nguyen (12), “sometimes I’m [at school] and I get hungry but I can’t get any food.” The students need to eat enough to last all day, but they have to wait a while sometimes, so it would be good for them to be able to get a snack or something. Also, that left door really throws off some students sometimes, and the school could probably fix it to help avoid some problems with students going through the wrong door and causing traffic jams. On a more serious note, athletes at Northern have to pay quite a bit of money for the pay-to-participate, usually about $150. The expenses can start to add up eventually, and it is not like everyone can have a scholarship. It seems almost like students are paying quite a bit of money to have fun and represent the school at the same time. Do not underestimate or ignore the small things, even they can be issues that need help.
Portage Northern’s staff and students are working hard to do their best and make the school better. Though previously rated on of the top ten schools in Michigan, the school still has room to improve. From academics to the things that may seem insignificant, Northern could use some work to become one of the top schools again.