Huskies hand PC their second loss of the season 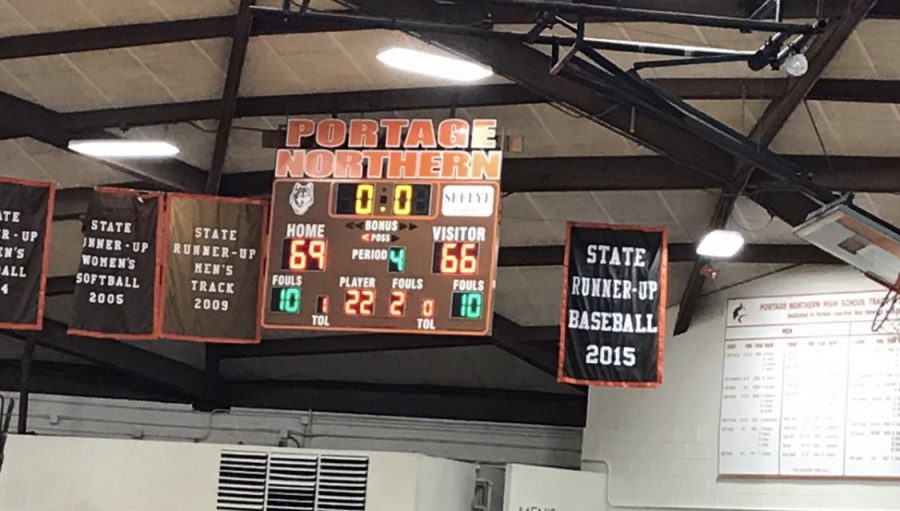 Headed into Friday night’s game, the Portage Central men’s basketball had only lost once. By the time they left the Igloo, their loss column had increased by 1 when the Huskies defeated them in double overtime by a score of 69-66.

After 32 minutes of heated basketball, the Huskies were tied 50-50 against rival Portage Central heading into overtime.

“I knew our guys weren’t gonna quit,” said head coach Ben Neal. “PC could keep coming, but our guys were refusing to quit and I never really doubted the fact that we were gonna get it done.”

Four more minutes wasn’t enough, as the Mustangs forced a second overtime with a last-second layup after the Huskies led for the entirety of overtime.

Finally, in the second overtime, the Huskies prevailed. As PC’s desperation heave glanced off the rim, the Huskies celebrated after a 69-66 double overtime win. It was only Central’s second loss of the year, and was Northern’s 7th win in their last 9 games following their 61-45 loss to PC.

Senior Nate Mason, who led the Huskies with 17 points, was confident from the moment the game started. “Nothing really surprised me,” he said. “It seemed like we had the win before we started.” Mason also stressed the importance of the team’s mental preparation before an upset win. “All we had to do was play better than them that night,” he said. Senior Cesar Campos also had a big night, putting up 15 points of his own.

The Huskies are at home for their final 4 games, finishing the regular season with Gull Lake, Mattawan, Coloma, and St. Joe before heading to the district playoffs. The Huskies look to continue their hot streak jump started by their hard work and year-long improvement. “Our guys have been just grinding all year long and buying in to the whole idea of getting better,” Neal said. “When you add five guys out there who have all gotten better, that makes a team who has gotten better. We continue to buy in to that concept of 5 guys each doing their job.”