For the first time in 13 years, PN's Marching Band makes their way to Detroit Ford Field 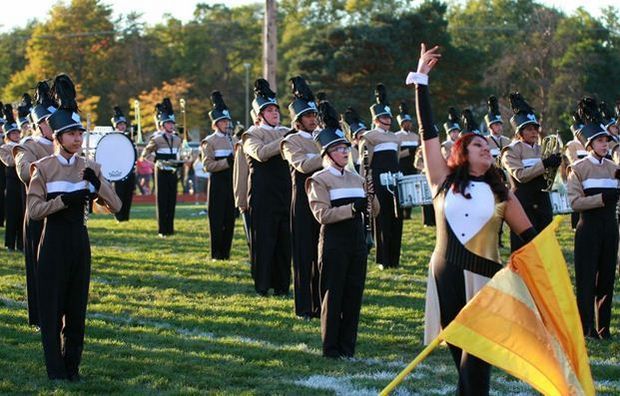 “This year’s concept is all about the experience of going to the movies! Movies are not just to sit around and watch, they play with your emotions. So we grabbed that concept and ran with it. We have ‘scenes’ that clearly cause the same emotions [such as] -action, sci fi, thriller, love story – and we try to replicate those concepts on the field,” said Mr. Josh Bartz. Mr. Bartz is the band teacher at Portage Northern and has led Portage Northern’s marching band to 7th place in state at Ford Field on the second of November.
Marching band does more than provide a halftime show at football games – it is a time-consuming instrumental fall sport. Marching Band and Color Guard may not practice as many days a week as Northern’s sports teams, but they definitely practice just as hard. “Marching band doesn’t have a bench for the players who are having an ‘off day’,” said Emalee Bruns (11), a member of color guard. “One player can’t carry the band to victory. Everyone has to do well for the whole to succeed,” Johnson said.
“The amount of people intimidated me, and the show was just one big adrenaline rush,” said Colin Johnson (12). Johnson is among others that led PNMB to victory. Justin Zinkel and Chloe Heintz are also both drum majors and leaders for Portage Northern’s marching band. “These are the unsung heros making sure that the above mantra is happening all the time. They have the ‘down and dirty’ jobs in the band that no one else really wants to do and these guys do it with excellence,” said Mr. Bartz. “One of the big things that we strive for is ‘excellence in every detail.’ This holds true on the field certainly, but also in the way we leave our field, or band room, our uniforms, the buses at the end of the night, the stadium where we sit, the way we behave in other classes, etc. This is a fundamental concept that the leadership team focuses on,” said Mr. Bartz. He goes on to say, “They are the one that lead by example and then come along side when things aren’t going well to help shore up the understanding. They are a remarkable group of young people!”