The Wizard of Ahhhs

PN's Drama Department presents the classic "The Wizard of Oz." 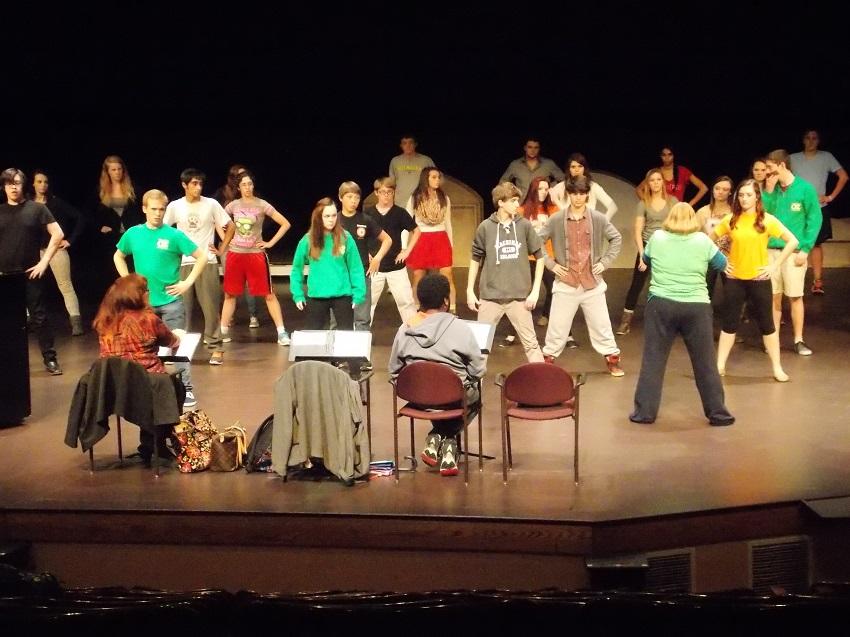 The crew rehearses one of many amazing scenes.

Roll out the yellow brick road and join Dorothy, Scarecrow, Tin Man, Lion, and Toto in Portage Northern’s production of Wizard of Oz. Northern’s musical rendition of this iconic film will celebrate the anniversary of its original release in 1939. As many know, The Wizard Of Oz tells the story of a girl going on a magical journey to find what her heart desires.

Hailey Burger (11) takes the stage as the unforgettable role of Dorothy Gale. “It’s been such an honor being Dorothy because Judy Garland has always been a huge inspiration to me! I’m extremely excited for the musical because it’s a classic that people of all ages can love and enjoy,” she said. With over 15 hours of rehearsal almost every week, every student involved in the musical works very hard to make sure that the standards are kept high. Dorothy also keeps her lovable and loyal little dog with her through Oz. “My favorite part of the show would have to be Toto because she’s so cute, cuddly, and already a star,” said Burger.

When Dorothy first lands in Oz from her hometown of Kansas, she is confused and alone. But then she is introduced to the beautiful Glinda, the good witch, played by Stephanie Beckner (12), who said, “I really enjoy that I get to fly because that’s not something many high schools are able to do.” Not only will there be others flying such as Dorothy, Tin Man, the Wicked Witch of the West, and a flying monkey, but there will also be pyrotechnics involved. Dorothy, after her encounter with Glinda, meets some munchkins who show her what road to travel. Rachael Daniel (12), who plays the Coroner of Munchkinland, said, “I am the only senior munchkin and one of the only four high school munchkins. I get to work with the elementary and middle school kids, so it’s exciting to see the future of Portage Northern’s drama department. But the best part is that I get to spend time with my little brother, who is a munchkin too!”

But where there is good, there is also evil. Rachel Hurwitz (12), playing Miss Gulch and the Wicked Witch of the West, said, “This is probably one of my favorite parts I have ever played. It’s very challenging and fun to play!” Rachel is also one of the lucky ones that gets to fly. She flies in on her broomstick several times during the show and has been training to make sure it looks perfect for the show.

On her way to Oz, Dorothy also meets a few friends such as the Scarecrow, Hayden Smith (12), the Tinman, Ryan Poniedzielski (12), and the Lion, Andrew Holsomback (9). Poniedzielski states, “I’m enjoying this show a lot and I think it is coming along really well. I think we are all getting along and creating good memories together!” This is an incredible show and one of the biggest at Northern with a cast of 95 people. Nobody will want to miss this. We’re off to see the wizard on November 8, 9, 10, 15, 16, and 17.