Chicago is a hit: And all that Jazz 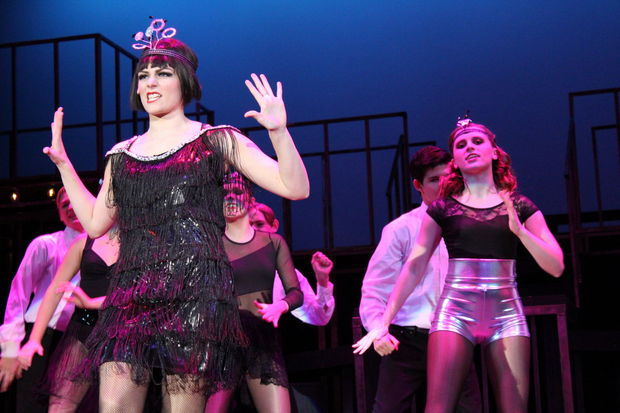 Anna Heystek, Special to the NL

Short skirts, swift moves, enticing voices, and loud attitudes, what more could someone want out of a musical set in the 20’s? Chicago is everything musical enthusiasts want out of a star murderess teetering on death row. If not drawn to the musical because of the sheer rareness of it done in a high school, then come simply because of the raw talent and effort the cast and crew have put into the production.

The eye-catching starlet Velma Kelly (Kim Hawkey 11) is looking for a way out of prison, with the help of manic lawyer Billy Flynn (Andrew Holsomback 10). However, newfound harlot Roxie Hart (Isa Figueroa 10) interrupts the plan when she enters the jailhouse scene and sets her eyes on Velma’s stardom, with little help from her husband Amos (Drew Dixon 11). The battles, alliances, and dreams in the show create an enchanting storyline impossible not to adore.

For the first time in school history, our musical has a live band seated on the stage. The fact that the actors talk directly to the band during the show, as well as simply the feel of seeing that glistening soprano saxophone makes the musical really come alive. Not only that, but the costumes look as if they have come straight from the 20’s. The flapper dresses, head to toe black outfits for dancers, and hairstyles to match fit the show perfectly. Also, an important part of all musicals is the vocals, so it’s only fitting that Hawkey and Figueroa seem to have been born for their singing duo roles. Along with vocals, Chicago requires very highly skilled dancers in order to pull off the moves, but at Portage Northern they have really outdone themselves. Falls, flips, turns, dips, the stunts and choreography in this show is unforgettable, it’s possible to find yourself even slightly scared for the safety of the skilled cast.

The risk of doing such a daring musical certainly contributes to making this show one of Portage Northern’s best musicals since The Wedding Singer in 2010. Although Wizard of Oz, Avenue Q, and Thoroughly Modern Millie were all entertaining shows, Chicago is a show that will make you cry buckets, burst with laughter, and will certainly appeal to every student and adult out there. Thanks to new director Ashley Bowen and new choreographer Jody Burns; this show will be known as one of the riskiest yet most spectacular musicals in Portage Northern’s history.